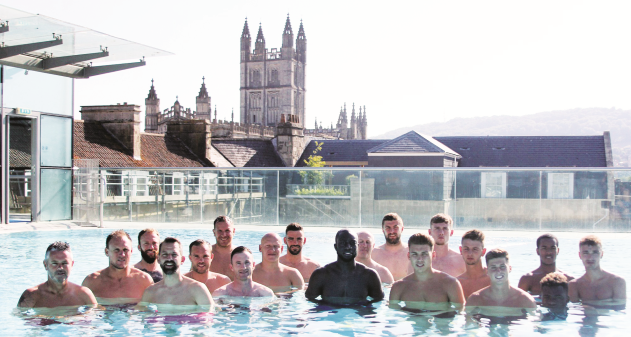 Seven-Thirty-AM runs, double sessions, a Thai meal and relaxing in the spa overlooking the city skyline – Bath City’s pre-season preparations have been all about striking the right balance.

Manager Jerry Gill is leaving no stone unturned in their quest to start the new season strongly.

Using the top-class facilities at Bath University, the Romans had a three-day training camp that began first thing last Friday morning and included a win against Reading U23s.

“We’re trying to crank things up and make it as professional as we can,” Gill, who took over partway through last season when Gary Owers joined Torquay United, tells The NLP.

“The training camp was very much around getting the new players together with the players we’ve kept from last year.

“On Saturday we played Reading U23s, which was a really good exercise. We watched the England game at the stadium after, before going out to one of our sponsor’s restaurants – YumYum Thai – with the directors and staff because I want the boys to know all the people behind the scenes.”

In a summer where the togetherness of the England senior squad has shone through, Gill believes it underlines the importance of the work that goes in before the big kick-off.

“I’ve watched Gareth Southgate closely, a lot of coaches will be doing that, and you see how together the England squad are,” Gill says. “Having come through Category 1 and 2 Academy coaching, it’s very much around player-led and player ownership. I do that with our group. We’ve sat them down and let them come up with their own fine system, we’ve spoken about having a Plan A and Plan B tactically – which was difficult to do last season after coming in in October – so there’s a lot we’ve been able to do and talk about in a short space of time. Three days is invaluable in Non-League and we feel it’s had a real benefit.

“I’ve done a lot of work in the summer on the players we’ve signed, going to meet them and looking them in the eye, to get to know them as people. I know them as football players but I need the right characters for what we’re trying to do at the club. We feel, because of that, they’ve amalgamated really well.

“The ones we’ve got are professional boys, whether they’ve come from League Two or underneath, they are all winners and want to achieve something.”

Gill, right, doesn’t hide away that the aim is to be in the thick of the National League South promotion race in the upcoming season, as the club looks to return to Non-League’s top flight once again.

He wanted to address forward options and his additions have been impressive. John Mills has arrived from Hereford with a reputation for goals, Ryan Brunt has dropped down from the Football League with Gill benefitting from the former Bristol Rovers and Exeter City striker having a successful business outside of football – much like Sean Rigg, who joined from Newport County last season after setting up his own tattoo business.

Then there’s Adam Mann. Scorer of 24 goals for Evesham Town last season, he’s lost two stone of weight and joins with a point to prove at the level.

Gill also plans to keep utilising strong links with League clubs for loan players as he successfully did last season as the Romans narrowly missed out on a top-seven spot.

And the boss feels the mood is high around Twerton Park.

“That last four or five weeks of last season there was a real buzz,” he says. “We had over 1,000 for the St Albans game on the final day and I wanted that to carry on for the start of this season, and it feels good at the moment.

“We know there’s a lot of hard work – I’m not daft and saying we’re going to go into the new season and expect to win every game, no one has that divine right. But we’re going to give them the best possible chance.

“The squad is slightly smaller. We’ve got the same budget, I’ve not got loads of money thrown at me, but we’re working within it. Those little bits off the field have helped to bring it all together and hopefully give us a chance of being really successful.”

The added extras include squad numbers and being able to train at Bristol City’s Academy, meaning access to 3G pitches but also the gym, hydro-pools and analysis suites. Analysis app Hudl will also be utilised where the players will be able to view game clips each weekend and talk about them with their coaches.

“John?Millard (sponsor) does a lot of work for us and he’s been down at the ground putting the Bath City logo up in the changing room and tunnel – it’s the little things the players notice and like,” Gill says.

“We’ll be judged in the end at what goes on at 3pm or 7.45pm, but there will be no stone unturned, there will be lots of detail on and off the field for the lads. We’ll be ready come August 4 to hopefully give ourselves the best chance.”