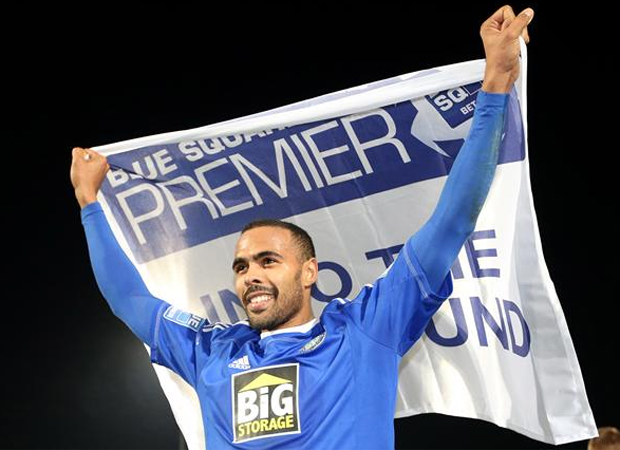 WHEN you’ve scored past Real Madrid goalkeeper Thibaut Courtois, you’ve probably got something worth saying when it comes to strikers.

Having seen the way the former Kidderminster Harriers, Luton Town, Macclesfield and England C striker is with the Bucks’ young hot-shots, Cowan has added the 32-year-old to his staff.

Barnes-Homer will still be available for selection but his remit now includes becoming striker coach.

“The strike-force at Telford is frightening,” Barnes-Homer says. “Marcus Dinanga is 21, he’s just signed permanently from Burnley, but he was at Telford last season and scored 25 goals.

“We’ve got Daniel Udoh who was at Crewe and been loaned to teams like Leamington and this season he’s got 16 goals. Andre Brown was at Kiddy, is a powerful striker who can score goals and Amari (Morgan-Smith) who has experience. The young lads want to learn and progress.

“You’re competing against yourself. Can you keep that standard? Can you bully defenders, can you help your teammates? I enjoy watching young players scoring goals and doing well because I was that age and I remember how
I enjoyed it. That’s what you have to make them see. It’s about winning things and scoring goals.”

Barnes-Homer, who is still training every day and ready to go despite not being a first team regular, is drawing on his own upbringing.

“We bounce ideas,” he says. “We try to show them different runs, encourage them to get in the box – can you get in those goalscoring positions? Can you get your body into the centre-half differently, or win the ball in the air differently?

It’s things I learnt when I was their age because they play differently these days. It’s to have more pictures in your head.

“I’m always onto them – goals, finish, push each other. There’s a respect and competition between the strikers but they all want each other to score goals. That’s what you need, but the main thing is to push yourself.

“As a striker, if you want to be good, you have to score 20 goals every season consistently. Work on your weaknesses, add it to your game, it’s different challenges.

“When I was at Wolves and trained with the reserves you’d see players like Nathan Blake, Dean Sturridge, Stefan Iverson, Kenny Miller – even Leon Clarke, who was a year above me, is an established striker. Look at the goals he’s scored at all his clubs.

“When I was at Wycombe it was Jermaine Easter, Tommy Mooney. At Luton, Kevin Gallen, Tommy Craddock. People who score goals.

“You play your own game but you take little parts. Justin Richards at Kiddy was always onto me: Come on, be better.

From Kidderminster, Barnes-Homer went on to Luton, was part of Cambridge United’s FA Trophy and promotion double and starred in Macclesfield Town’s 2012-13 season where he scored 21 goals as well as two against Cardiff City in the FA Cup third round.

A broken cheekbone probably hampered the recent years of his career as he bounced around clubs, had another spell in America, before settling at Telford. And he reckons the club have got a serious managerial talent on their hands in former Nuneaton defender Cowan.

“He’s only been managing for this season but he’s up there with the best managers I’ve had in my career,” Barnes-Homer says. “His ideas, the way he prepares – it’s frightening. We’re not full-time but we dominate teams in the division.

The way the team plays, the way the players understand him and the way he is as a manager is scary. I’m surprised he’s not already had other interest from clubs.”

Barnes-Homer says his career is now about the bigger picture of Telford doing well as they aim for National League North promotion.

But what about those nights he’s enjoyed. Like the big games with Luton, his exploits with Macc and his England C caps, which included a clinical finish past a Belgium side with Courtois in goal.

“That got him his move to Chelsea didn’t it?” Barnes-Homer laughs. “It’s memories over the years isn’t it – memories that can’t be taken away.”