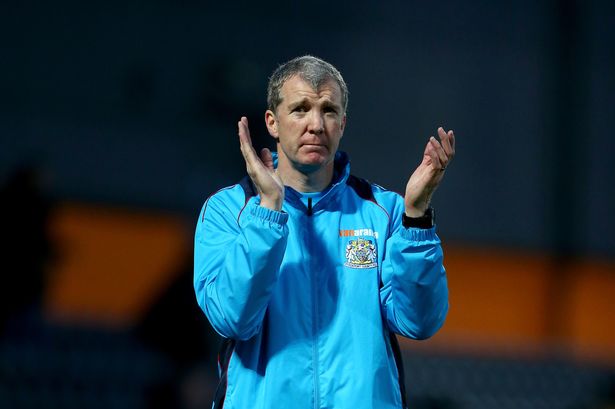 Jim Gannon can still remember clearly the day he helped upset West Ham United as a Stockport County player 25 years ago – now he wants to mastermind a famous victory.

Gannon is actually a West Ham fan and started regularly attending matches in 1976 before crossing paths on the pitch in a fourth round League Cup tie in 1996.

County drew 1-1 at Upton Park before winning 2-1 on home soil thanks to an Iain Dowie own-goal, in a run that eventually ended at the semi-final stage.

“I think Iain Dowie was marking me at the time,” Gannon said. “I always say if he didn’t head it in the goal he was heading it into me anyway!

“I was on the terraces at Upton Park as a young boy, I never dreamt I would play professional football or play for West Ham or play on that pitch but County made that possible for me.

“I still remember the feeling now from that game, to get a draw and get West Ham back to Edgeley was extra special. We showed we were a team a cut above League One at the time, it wasn’t a one-off.

“I’ve enjoyed those great experiences as a player against Premiership sides, now it’s the turn for my players. I hope they enjoy it as much as I did.”

The tie is another milestone in Gannon’s third spell as manager, with his time in charge now stretching more than 500 games, as the club battles for a long-awaited Football League return.

The 52-year-old has already achieved one promotion and with the backing of new owner Mark Stott, County are one of the favourites to go up again.

Success in the FA Cup after a promising start in the league has further strengthened the case that they are heading in the right direction.

“The club has given me everything to be successful,” said Gannon. “I’m grateful we’ve got an opportunity now to give a sixth and seventh year of continued success and growth.

“All I want the players to do is enjoy the occasion and play the game well. It’s them that’s going be on the grass, kicking and heading every ball, making the tackles, they’re the ones.

If Gannon’s career has come full circle, so has that of captain Liam Hogan.

The centre-back started out at Manchester-based Woodley Sports before excelling with FC Halifax Town and earning a Football League move to Fleetwood Town.

He’s since played for Tranmere Rovers, Gateshead and Salford City, who he helped to promotion at Wembley, and is now back in his home region playing in one of the games of his life.

“Football sometimes tells it’s own story a little bit when players score against clubs they used to play for,” he said. “I didn’t realise I’d come full circle with Woodley which is just down the road.

“When I came back this way it really brought memories back. When you’re at Woodley you never think this is where you’re going to be now.

“It’s been really important on my journey playing there and getting the development I have. I worked at the same time as a PE teacher. Football isn’t a long career, you need something to do afterwards.

“It’s been good for me because it’s been tough and not a straight road to now, there’s been different challenges and setbacks of being part-time which really makes you grow as an individual not just as a player.”

Hogan was one of the big-name players brought in to achieve the club’s promotion goal and their performance against Rochdale in the first round shows they can make the step up.

“The Rochdale one was fantastic in that we were on the front foot and then defended how we did,” he said. “In terms of opposition, first time against a Premier League is really exciting for even someone like myself.

“We’ve got structure and a way of playing that will hopefully cause West Ham problems. We’ll stick to that and show our best.

“There’s a lot of belief in the changing room and we won’t be leaving it down to luck.”