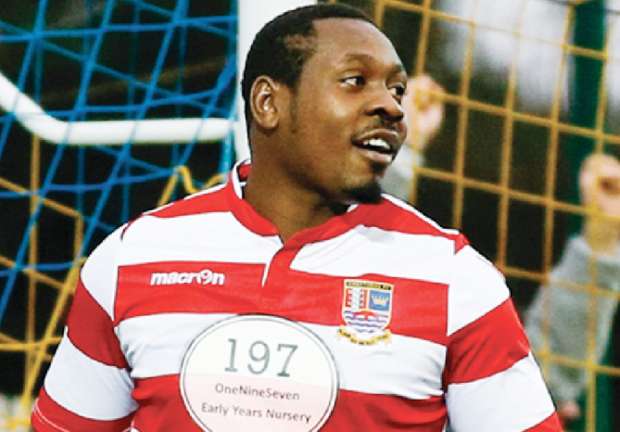 YOU’RE wanted by Sir Alex Ferguson so much that the greatest manager that there’s ever been is not only hammering your agent’s phone, but he’s put in three bids for you. He usually gets what he wants.

But Leicester City hold firm. They’re not letting Manchester United in to nick their prize possession, they think quite highly of you as well you see.

Why then, less than six short years later, are you turning out for VCD Athletic down in the bowels of the Ryman Premier?

While Jamie Vardy has gone from a struggling club in Non-League’s Step 3 right the way through to the game’s very top with the Foxes, the fortunes of Ricky Sappleton have very much gone in the other direction.

In the end, it didn’t go to plan at Leicester. It didn’t get much better at Bournemouth, Oxford United or Telford, either. It went quite well at Macclesfield and although goals galore arrived at Billericay, it’s VCD – the tiny Kent club where crowds rarely top 100 – where the nippy forward big things were predicted for is now playing on loan from Kingstonian.

He’s not washed up and at 26, there is still time to climb back up the ladder. Don’t blame his fall on attitude either. Far from being full of regrets that his career collapsed in front of him, the striker has kept his focus and is still aiming high. No sulking, no what ifs. Sappleton is just grateful to be playing.

He said: “Manchester United did come in for me, but I am not really sure what actually happened.

“They came in a few times, my agent spoke to Fergie a lot but in the end nothing came of it so we left it at that. I was near the Leicester first team at the time so I was enjoying my football so didn’t complain – you can’t look back, even now.”

He never did see the bright lights of Old Trafford but he hasn’t lost his love for the game or the desire to improve every season.

Sappleton scored a fine hat-trick as VCD stunned Dulwich Hamlet 3-2 last weekend and although he won’t forget what could have been, the ambition won’t ever leave him.

He said: “I will always back myself; I score goals and who was to say I couldn’t do that in the Premier League?

“But I have no regrets, I am enjoying playing now, I am scoring goals and I am happy. At the end of the season we will see what happens, you never know.

“I am probably the least surprised by Leicester’s success. The quality is there, and they have bought well. Ranieri is a great manager for a club like them.

“I still talk to a few of the lads, in Kingy [Andy King] and Schluppy [Jeffrey Schlupp] and they say they are really enjoying it. I’m pleased for them.”