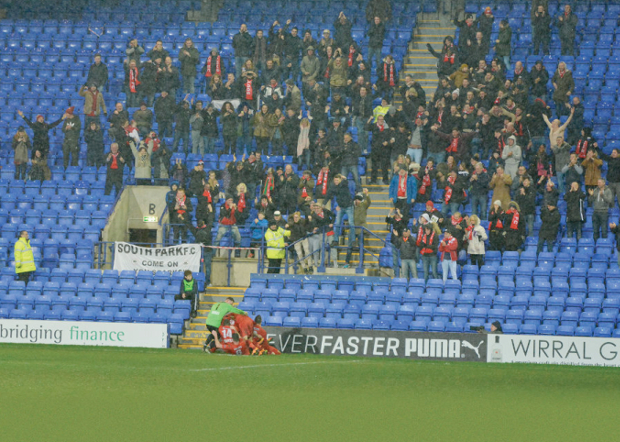 But when Kieran Lavery curled in a sumptuous free-kick to cut Tranmere Rovers’ lead to 3-1, the South Park striker did an about turn and sprinted, arms spread wide, to celebrate with their travelling supporters. He finished the mad dash with a superbly executed knee slide.

A little more than ten years have passed since the club were playing in the Crawley & District League. Back then players would have to pay their subs to get a game. Tranmere Rovers were in the Football League and reaching cup finals at Wembley.

More than 200 people – double the Sparks’ usual home gate – had made the trip to see the Ryman Division One South club’s big day and bask in their big moment.

“I didn’t realise he was that quick,” boss Malcolm Porter laughed. “We had more fans there than our home matches. It was fantastic to have that amount of people there. They sung for the whole match, they didn’t shut up. It was fantastic for the players. It added to the whole experience and event.”

Lavery’s celebration said a lot. How much it meant to him and his team-mates, who eventually caught up with him, and despite the defeat what a story this will be in their lives.

“We said to the lads before, ‘This isn’t something where you’ve played one game and got a lucky draw,” Porter said.

“You’ve played seven matches to get this far. You deserve to be here and be on the same pitch as Tranmere’.

“That’s what the Trophy does, what the FA Cup does. It gives you the opportunity for days like this. In 20 or 30 years’ time when the players get together or bump into someone, immediately it will be back to, ‘Remember when we played Tranmere’.

“The club have come a long way in a very short space of time. To go up against a team like Tranmere, when ten years ago we were a park team that has progressed up the divisions, is massive. But here we are – and we did ourselves justice.”

They were one of many clubs doing the competition justice too. The FA Trophy has taken a kicking over recent years. As followers of Non-League football, we’re quick to throw a strop when Premier League clubs disrespect the FA Cup. But then, some are quick to bad mouth Non-League’ top cup.

Part of that may come from the former Football League clubs whose fans, at first, see it as a kind-of League Cup. But this isn’t the farcical Check-a-trade Trophy, it’s a prestigious prize that represents a great chance to play at Wembley.

We’ve had suggestions it should be turned into a midweek competition and replays scrapped. No thanks. Instead, we should be fiercely protective of it.

Porter speaks of how big a deal it was for South Park. How the players were out celebrating with supporters on Saturday night and how he hopes it can push them on for the rest of a busy season.

After beating Southport, Wealdstone’s players are going down in history with fans of a club that lifted the silverware at Wembley in 1985 and are dreaming of this squad going better than the one that reached the semi-final five years ago.

That was an incredible run by the then-Ryman Premier side, who eventually fell to Newport County over two legs.

Last year we saw Step 3 duo Bognor Regis Town and Nantwich Town reach the final four. Players like the Rocks’ Craig Robson and the Dabbers’ Elliot Osborne got moves into professional football off the back of it.

Worthing drawing with Sutton this year, Dulwich Hamlet taking a huge backing to Whitehawk – there’s so much on offer in the Trophy. Lincoln City, Tranmere, Forest Green, Barrow are all in the last 16 and rewarded for a winning mentality.

History shows that a dual assault on promotion and a run to Wembley can happen. York City did the double, Wrexham won it and made the play-offs, Cambridge United achieved both, Grimsby Town went up and were finalists. In fact, Paul Hurst’s Grimsby regularly went the distance in both before they finally got back into the Football League.

The Trophy might not offer the riches of the FA Cup – perhaps some of the Cup’s TV cash can filter into the pot – but it does still offer incredible moments.

“There’s obviously different amounts of money in every division in Non-League, but we’re right down the bottom in terms of paying our players,” Porter said.

“As much as money can be important, you can’t buy something like playing Tranmere. It’s nice to have that reward. It’s a memory that will stay with us forever.”