GENEROUS West Didsbury & Chorlton fans have raised over £500 for a local cancer hospital – a cause close to chairman Steve Eckersley’s heart.

The club hosted a charity double header last weekend, with both the men’s and women’s sides in friendly action on the same day for the first time.

Eckersley’s wife Michelle spent time at The Christie before sadly passing away this year.

Chris Rowley’s side won 1-0 against a youthful Stalybridge Celtic side thanks to Aarron Grewal’s early goal. WDC Women then lost 5-1 to FC United, with Rachel Mason scoring a header.

Eckersley said: “We’re really excited to put this event on for a number of reasons. My wife was treated for cancer for over three months earlier this year. Unfortunately, she has since passed away, so it’s a cause that has personal links for me and many others who are similarly affected in the local community.

“We’ve been looking for an opportunity to have an event for The Christie, and we are really pleased that Stalybridge and FC United have agreed to play us today.” 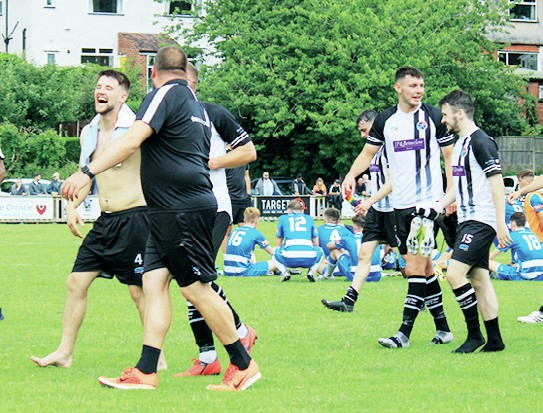 A third of the gate receipts went to the charity, and the total was boosted by activities such as merchandise sales, a raffle and contactless donations.

The charity day also marked the first time fans were back at Brookburn Road following the North West Counties season again being abandoned due to Covid-19.

“The fans coming back is exciting – we’ve been waiting a long time to get them back. Having fans in makes non-league football a fantastic, exciting experience. People enjoy coming to the game and watching their local team.

“Our links to the local community have expanded and grown over the last few years, and we’re really proud of that – we’re a genuine community club,” he said.

Activities as diverse as after-school clubs and choir practice all take place at the ground, who also house their own junior sides at the Hardy Farm complex adjacent to the ground. It’s all part of the club’s aims to improve – on and off the field.

“Our main focus is developing our football – we want to progress through the leagues as high as possible. We’re a very ambitious club – we’re limited on what we can do in terms of player contracts, but we want the local community to support us. The fans here create a unique atmosphere – they have songs for many of the players and are a really noisy bunch. It makes a massive difference having the fans in – the players raise their performance, and probably the match officials too!

“It’s crucial we get them back in –a lot of clubs haven’t survived Covid-19. Financially, the money we get from gate receipts, alcohol and refreshment sales really are vital for a club of our standing.”

The FA Cup provides another potential revenue stream, with last week’s localised draw pitting the club against Avro in the extra preliminary round.

“I’ve not ordered my suit for Wembley just yet – that may be a bit premature! It’s another opportunity for us against a very strong team. There’s a lot of prestige and finance at stake. Chris knows the mandate – and that’s simply to progress as far as we can,” he said.