Posted on 5th June 2013 by Steven Coney in England C, Featured with 0 Comments 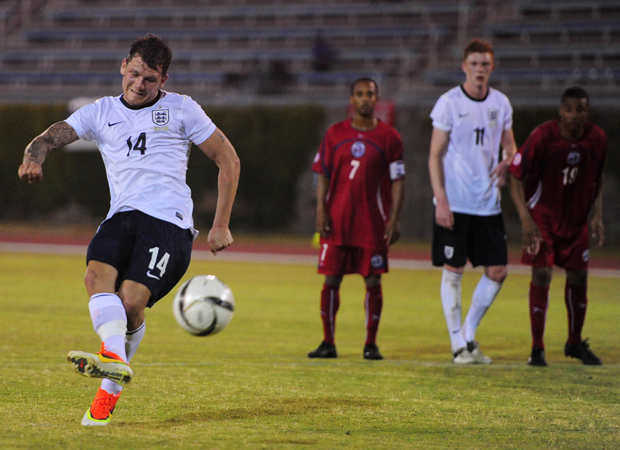 Non-League’s Three Lions, the first England team to play on the island, ran out comfortable winners with Forest Green Rovers striker Norwood hitting his treble in the second-half.

The Chester midfielder played a quick one-two with Jackson before steering past the on-rushing keeper with the outside of his boot.

Soon it was two when Johnny Hunt was fouled in the area. Jackson stepped up from 12 yards to send the keeper the wrong way and make it two.

Bermuda got one back before half-time when John Barry Nusum headed in a rebound from Reggie Lamb’s fierce drive.

England C boss Paul Fairclough made five changes at the break and it didn’t take long before two of his substitutes were combining for a goal.

Andre Gray sent over a perfect cross and Norwood nodded in from six-yards with the second-half just eight minutes old.

Fairclough’s team were in full control and Norwood made it four with a cool finish. Outmuscling the defender he burst clear and slotted past Stef Dill.

His hat-trick came from England’s second penalty of the evening when Gray was bundled over. Norwood made no mistake by firing into the top corner.

And in the 90th minute Gray, who moments before had been denied by a great Dill save, turned home to make it six.

Fairclough said: “It was a fantastic performance and I’m very proud of the players.”

For a full match report and reaction to England’s trip to Bermuda, make sure you pick up a copy of The Non-League Paper this Sunday!