Home / Latest News / England C / England C reaction: It’s a thriller! Can we do it all again?

England C reaction: It’s a thriller! Can we do it all again?

Posted on 28th March 2018 by admin in England C, Features with 0 Comments

If any reason is ever needed to make a cross-border showdown a regular thing then a five-goal thriller should just about seal the deal.

Fejiri Okenabirhie was the star for England as he hit a dazzling hat-trick that ultimately led Non-League’s young Three Lions to glory despite Wales’ refusal to go quietly into the Barry night.

Twice the hosts, made up of open-age Welsh Premier League players and playing their first international as a C team, cut England’s two-goal in half, but their search for a leveller went unrewarded.

Paul Fairclough’s England were outstanding, particularly in the first-half. Zipping the ball across the Jenner Park 3G surface, the Welsh were in a spin.

Okenabirhie opened the scoring on ten minutes and extended the lead from the penalty spot early after the break.

Wales substitute Mark Jones pulled one back before the Dagenham & Redbridge forward got his third. As you’d expect, Wales came again with the experienced Chris Venables setting up a grandstand finish.

Fairclough’s side, however, saw the job through and the boss could not have been happier with how his squad – with seven new caps in the starting line-up – performed.

“The first-half performance, against a very experienced side, was probably one of the very best performances from a technical and coach’s point of view that we’ve ever had.

“I’ve taken some phone calls from people and they were waxing lyrical about the performance. It was terrific – the movement, the passing was slick and fast, pressure, winning the ball back. Overall it was quality.

“Second half was a struggle because they latched onto our pattern of play and we didn’t always adjust to that, but we had enough to go and hurt them at the right times. The third goal came at a time when we really needed it.

“We also showed great courage near the end of the game because we needed to. It was a really good performance from a good group.”

It would have been England in an early daze had it not been for Grant Smith. The Boreham Wood keeper underlined why he’s thought of as one of, if not the, National League’s best with an incredible save to keep out Danny Gossett and then slap the loose ball behind.

From the corner, Adam Roscrow headed over from underneath the bar as Wales started on the front foot.

Before they knew it they were behind. England pressed, pinched possession high up the pitch and Blyth Spartans’ Dan Maguire set off towards goal, before unselfishly squaring for Okenabirhie to stride onto the ball and emphatically finish into the top corner.

For a period, Wales couldn’t get close to England as they took control, demanded the ball and moved their opponents around the pitch with incisive passing.

A wonderful move should have led to their second. After keeping the ball they switched into attack mode with Sam Ling sending Maguire in behind the defence.

His pull back came to the quick feet of James Hardy, whose placed shot cannoned off the bar to Okenabirhie. With the goal yawning, he could only head over the crossbar.

It was a let off he made up for within eight minutes of the restart, soon after Smith had made another smart save to keep out John Owen. Maguire was tripped in the box and Okenabirhie made amends for his miss by slamming home from 12 yards.

Wales made changes that disrupted England and within three minutes of his arrival on the hour, Mark Jones had spun in the box to get his side back in the game.

Then Okenabirhie picked up the ball from Pinnock’s pass and turned to face up the defence, shifted the ball quickly to his right and unleashed a wicked shot that flew in to complete his treble with 15 minutes left.

Game over? Not quite. Within five minutes Bala Town midfielder Venables snaffled up a loose ball and the home crowd sensed an equaliser in a now tense finale. Fairclough’s men were probably  guilty of over-playing as the clock ticked down and almost let Wales in more than once.

Aeron Edwards sending a good opening over the bar and substitute keeper James Montgomery making a strong save moments after his introduction.

“I haven’t been in the dug-out for a couple of years but the passion was right back,” Wales boss Mark Jones said. “I might be lucky we never equalised otherwise we might have had an invader!”

Mark Jones issued a passionate plea for Wales C to continue and give Welsh Premier League footballers the chance to pull on the red shirt.

The former Carmarthen manager was appointed Wales boss for the special match that he hopes will become a regular fixture in the calendar.

There is an appetite on both sides for that to happen and Jones is all for it after seeing his side put in a good performance, despite defeat.

“If you ask those players in there now, would they like a cup final or a European place or that red shirt, you won’t get that red shirt off them,” Jones said. “You won’t get it off them. It meant so much for them. They were fantastic.

“The league deserves it. Why aren’t people playing the Welsh Premier League in these internationals? These players deserve it. We’ve competed in Europe. People say we’re not getting through to the latter rounds – would the Conference teams get through?

“We don’t get enough credit for the type of football this league can play. When we were behind and we showed our passion and pride, we showed we aren’t a bad outfit.”

Jones also felt the game against England C’s National League players gave the Welsh an opportunity to show the strength of their domestic competition.

“I don’t think it gets enough credit,” he said. “We’ve had teams like TNS doing everything bar getting to the latter stages of Europe. We’ve had teams beating European teams – I go back to when I was at Carmarthen. We were playing Copenhagen, by the way, they had seven Danish internationals and we got beaten 2-0 over two games. All of our boys were going to work afternoon. Then you’ve got Newtown beating teams like Valetta.

“The only disappointment about the day is we didn’t get a result. But we’ve done enough to shake the tree a little bit. There’s nothing wrong with the Welsh Premier League, nothing at all, it’s just underrated.”

Jones was impressed by some of England’s play and hat-trick hero Fejiri Okenabirhie.

“I must congratulate the lad who scored the hat-trick for England,” he said. “He looked a wonderful player. Saying that, so did six or seven of mine and I can’t be any prouder of them.”

Proud England C captain Ryan Croasdale says his first England C armband role was made easy because of the amount of natural leaders in the squad.

The Kidderminster Harriers midfielder has become one of Paul Fairclough’s regular picks having impressed when the group took on Panjab FA and a Jersey FA XI at the end of last season.

Skipper with Kiddy, the 23-year-old former Preston North End youngster had now led his country out – as well as to victory – and he felt the performance of his teammates belied their short time together.

“It’s a real privilege to lead out England,” Croasdale beamed. “Obviously I’m captain at Kidderminster now so I tried to take that valuable  experience into the game tonight.

“I had to think about what I do at club level, encouraging the lads, but there’s not just me as a captain here – the full XI are leaders and everyone helped each other.

“First half was very good. Second half we had a bit of pressure and let them back in every time we got ahead and didn’t kill of the game. But there’s definitely talent here in this squad.

“The gaffer selected players who can receive the ball under pressure and then Fej getting his hat-trick was a big bonus for him.

“We got here on Sunday and had one proper training session but you can tell straightaway the players we have.

“If you work hard off the ball then the football will come with the players we have. That was proven against Wales – we played some really nice stuff.” 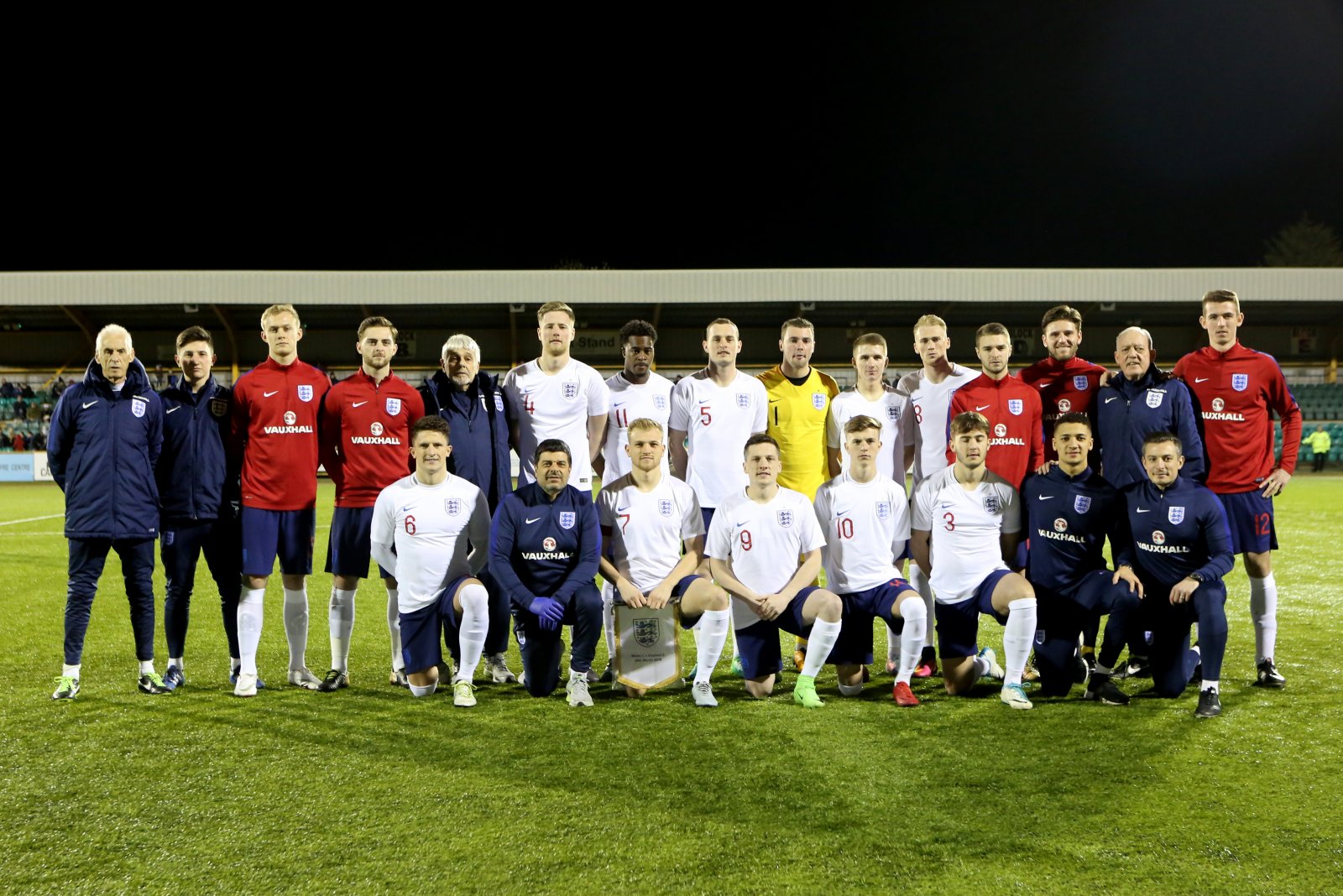 Worth missing the league for

The Spennymoor Town man won his first cap after being selected to start in the Three Lions’ midfielder three.

And it was worth missing Moors’ National League North defeat to Chorley on Tuesday night.

“It’s a difficult one because we’re going for promotion but he didn’t give me an option really. He said to come and enjoy it, do what I do for him – it was the right decision.

“I didn’t know what to expect before I came away. As soon as you get picked up from your house you know it’s going to be very professional and it’s been great from the first minute we got here.

“All the kit is laid out, you get weighed in the morning, urine tests to make sure you’re hydrated, food after training – it’s been great.”

Ramshaw returns to Spennymoor ahead of a busy run-in following a hit of postponements and their run to the FA Trophy quarter-finals.

Win their games in hand and they’ll make the play-offs – and potential a third promotion on the bounce.

“The club has had back-to-back promotions and we’re looking for another one,” Ramshaw said.

“It’s going to be tough because we’ve got Saturday-Tuesday-Thursday weeks coming up. But we did it last year when we won the play-offs so hopefully we can do it again.”

Worth missing the league for

There’s not much that can come between a goalkeeper and his gloves. Just ask James Montgomery – the Gateshead and England C stopper has his own brand!

Along with former Darlington and Sunderland RCA keeper Carl Morris, the 23-year-old launched Viper Goalkeeping at the beginning of the season as he looks into the future when his playing days are over.

As well as a crop of Non-League keepers in the north-east, Coventry City No.1 Lee Burge wears them – and, of course, Montgomery himself.

“It was something out of the blue,” Montgomery, inset, said. “We’re just trying to build the business, get more keepers in the League wearing them, but mainly people at grass-roots level because we know how much gloves cost. It’s nice to give the option of gloves that’s not going to cost an arm and a leg but still has the quality.

“With myself and Carl both being keepers we understand what people want. I wouldn’t wear them if I didn’t trust them myself. That was the main thing – I want to have good gloves I like and I can push rather than say, ‘Oh yeah, buy these,’ when I don’t believe in them.

Montgomery’s season has been stop-start after an injury in September saw him behind Dan Hanford in the Heed pecking order.

But since he had his chance to return at the end of January he’s been in impressive form and made his return to the England C squad in Wales.

“It’s nice to be back in the England C squad and working this week with (coach) Mick Payne and Grant Smith,” he said.

“It’s always nice to meet different lads from different backgrounds and clubs and see what they’re like as people.”