Posted on 31st January 2019 by admin in Eastleigh, Features, National League with 0 Comments 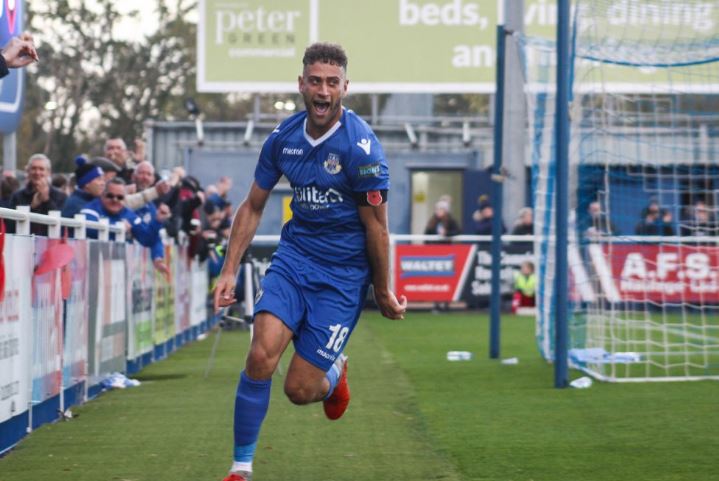 BEN WILLIAMSON says Eastleigh boss Ben Strevens has got the Spitfires believing they can gatecrash the play-offs.

Williamson scored the winner in the 3-2 win over Sutton two weekends ago and the 30-year-old striker says the confidence is flowing as they eye up the top seven.

“The mood is good,” Williamson told The NLP. “Since the new gaffer has taken over he’s done really well and everybody’s started to believe we can push on. That’s been important for everyone.

“Everyone would have been gutted if he hadn’t got the job. The first two results weren’t very good but I think that’s because everyone so badly wanted him to get it and it was maybe over-trying.

“When the pressure was off, we had two great results against Salford and Orient and that massively helped him.

“We’ve started to believe a bit more. He believes in his players and trusts us to do what we can do.

“When you’re assistant manager it can be hard to go straight into the manager role and you have to change – you can’t be as close to the players as you maybe can when you’re a coach.

“I think that was maybe hard at the beginning but we’ve got through that now and he has that manager’s respect.”
Williamson joined last season having spent most of his career in the Football League with Bournemouth, Port Vale, where he won promotion to League One, Gillingham and Cambridge United.

His career began in Non-League, however, as he was playing at Worthing while studying for a Mathematics and Business degree at Brighton University.

It was while playing on the south coast that he was spotted by scouts for Glenn Hoddle’s Academy leading to time in Spain alongside the likes of current League talents Sam Clucas, Jordan Hugill, Omar Beckles and Mickey Demetriou.

“The training was great – totally different,” Williamson said. “They weren’t focused on winning games, it was about your individual progression. It was brilliant being coached by Glenn – he was on another level!

“I’d never really had that sort of training. I was just playing games at Worthing. He started focusing on finishing and habits. I was only there four months and it was quite intense, but it was really good for me.

“I was at Uni and just going to go into accounting or finance. Then that came up and it was too good to turn down. You then start to believe you are good enough.”

Having tasted promotion with the Valiants in 2013, Williamson would love another with the Spitfires.

“The end of that season was brilliant, everyone was so happy. Hopefully this season we can get into it. We had a couple of disappointing results over Christmas but we’ve bounced back. Hopefully we can go on a run now.”