The NLP says… Let’s get the facts straight!

Posted on 27th March 2019 by admin in Alex Narey, Columnists, Features with 0 Comments 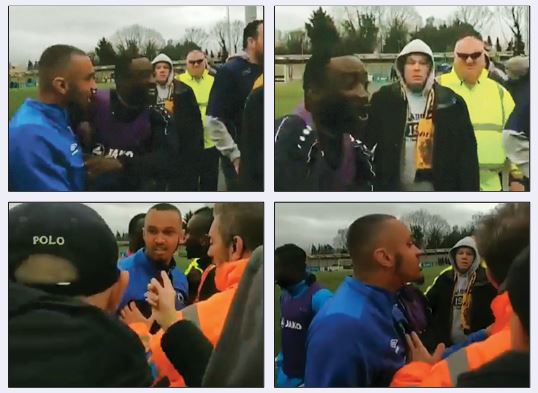 On Monday of this week, The NLP received a letter from a Slough Town fan in relation to an ‘alleged’ incident at Arbour Park last Saturday. When an email has a subject line that reads ‘player attacks fan’ you tend to open it and read with interest.

In the email, the player in question – Billericay Town’s Tambeson Eyong – was alleged to have jumped the barrier during half-time before ‘attacking’ a minor, it was also alleged that Eyong used threatening and abusive behaviour towards the home support, including a disabled fan.

I would imagine the same email was also sent to the Essex Echo, and there was enough in it for them to follow it up and produce a story on their website later in the week – focusing on the accusations of attacking a 15-year-old boy. Further quotes were added, so the paper obviously took the time to contact the sender for clarification.

As it turns out – and contrary to the original email – the police were not called and did not attend the incident, and while video footage circulated on social media clearly shows Eyong standing on the wrong side of the barrier from where, as a player, he should be, there was no evidence of him attacking anyone, let alone a 15-year-old boy.

It’s fair to say Eyong has something of a chequered past as a player, but even that was dug up in the article – which was also highlighted in the email – as if it was evidence that this type of behaviour was befitting of his character. But allegations – such as attacking a young fan – appear grossly exaggerated and even unfair.

The truth is, I am not even here to contest the chain of events from last weekend, but rather to state that allegations without the relevant proof can lead to serious dangers.

Twice this season The NLP has reported on serious allegations at matches – in August an Aldershot Town fan was ejected at Ebbsfleet for alleged racist abuse of Ebou Adams, and in January a pitch invasion by Chesterfield fans saw one supporter clash with Fleet’s Nathan Ashmore with further allegations of racist abuse.

Both incidents were reported by The NLP reporter present, who sought the relevant information from official club and police statements before filing.

We welcome fan mail at The NLP, but even when fans write in to complain about an experience at a certain ground – whether it is heavy-handed stewards or the outrageous bar prices – we tread carefully before printing such complaints because it can be hugely damaging to people’s characters. Fans have agendas; we can’t, with great confidence, judge the character who is sending an email.

For what it’s worth, when we did some digging on the Eyong allegation this week, there were also accusations of the player receiving verbal abuse from fans, and we understand a visiting photographer was also subjected to vitriolic taunts.

All allegations, of course, but there has to be a balance to what is reported.