AFC FYLDE are another of those Non-League clubs that use the ‘a’ word…. “ambition”. But unlike some that love to play down their investment, they make little attempt to hide it.

The number 2022 is emblazoned on the players’ kits and a huge flag at one end of the ground. It is the year by which Fylde aim to have reached the Football League and, like it or not, it defines the club’s whole ethos.

They’ll look pretty silly if it all goes wrong, or like so often seen, the money men get bored!

Fylde are pretty much Fleetwood Town’s younger cock-sure brother. They see what their sibling has and will kick and scream until they get it. 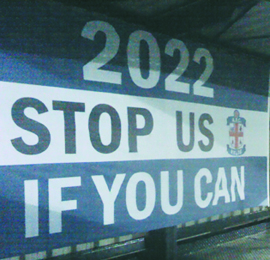 Some would argue the Fylde coast only needs one Football League club, but a third one is trying to join the party. Watch out Blackpool and Fleetwood!

The temperature has almost reached freezing as I head along the dark country road that leads to   Kellamergh Park, set back among the surrounding fields and can only be accessed through the car park of the Birley Arms, the local pub. Don’t mind if I do!

Dave Challinor’s side currently sit third in the Evo-Stik NPL Premier. They usually attract crowds of around 300, though a lower-than-average gate for the visit of Daisy Hill is explained by this being a Lancashire FA Challenge Trophy second-round tie. Then again, for a club whose watchword is success, every game matters.

Among the range of hot food, regular chips at £1.40 come recommended by one of the few visiting supporters and, on a bitterly cold night, a reduced crowd does not mean a reduced menu.

Three metal containers around the ground have been impressively converted into a sponsors’ lounge, directors’ box and Fuller’s Bar, which overlooks the pitch and fills up as the locals seek some warmth with kick-off approaching. A pint is £2.80 and a smartly-produced programme £2 on top of a gate price of £6.

Everything still feels new, yet the full extent of Fylde’s ambitions are shown by a proposed £12m sports village in nearby Kirkham, which is detailed in a brochure distributed to the home fans during the second half.

There is hardly a blade of grass out of place on one of the best playing surfaces I’ve seen at any level and Fylde clearly relish the chance to showcase their football on it. Daisy Hill’s goal leads a charmed life until Craig Flowers puts through his own net on 12 minutes. “It’s an own goal but we’ll take it,” quips the tannoy announcer.

Not that Fylde need any extra help as Danny Lloyd and Bradley Barnes strike before Andy Russell adds a fourth in the second half.

It is a rudimentary start to Fylde’s defence of this competition, but you can tell they’re after bigger and better things.