Home / Latest News / England C / Taste Of The Caribbean? Paradise For Me Is Chester!

Taste Of The Caribbean? Paradise For Me Is Chester!

Posted on 11th June 2013 by Matt Badcock in England C, The Big Interview with 0 Comments 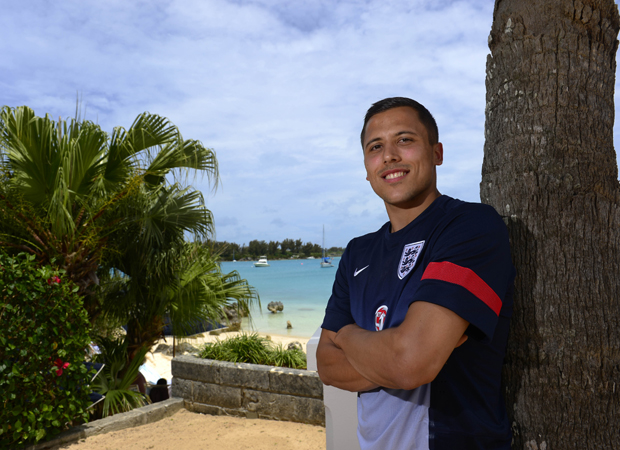 HEARD about the new England international who has an Italian first name and a Serbian surname?

He’s proud of his roots; his nanna was from Italy and his grandad from Serbia. But he’s as Manchester as the Gallagher  brothers and rain.

How pleased England C boss Paul Fairclough is at that. The 21-year-old midfielder was in scintillating form for rampant Conference North title winners Chester last season.

Seemingly intent on having a Goal of the Season competition all of his own, the former Manchester City youngster fired 17 in all competitions.

On Tuesday evening in Bermuda, with just five minutes gone of his England C debut, he had another. Curling the ball into  the bottom corner with the outside of his foot, Sarcevic announced his arrival on the international stage with a bang.

“As soon as the chance came I only had one thing on my mind,” Sarcevic says. “When I got on the coach after the game Clucs (Hereford’s Sam Clucas) said he was square waiting to tap-in.

“But when it went in… there’s no better feeling. I knew I’d connected well and to see it hit the back of the net five minutes in… unbelievable.

“This whole experience was mad. Probably better than I ever thought. To start, have the shirt, walk out with the boys, sing the national anthem – it was class. The feeling through my body, I was so proud.”

As a big Manchester City fan, Sarcevic’s evening was made even better when he grabbed a picture with City and  Bermuda legend Shaun Goater.

“When I came out here I wanted to go home with a picture with him because he’s a legend,” Sarcevic says.

His journey to an England C debut in the Caribbean hasn’t been straightforward. At his boyhood club from seven to 15, he’s come via Woodley Sports, Crewe Alexandra and now Chester where he’s enjoyed the “best season” of his career.

“To play for Manchester City, the club I support, was brilliant,” Sarcevic says. “But back when I was there they didn’t have the money they have now. I’m not saying anything bad but at that time it was like a proper family club. I loved it.

“With the millions they have now it’s a through that academy and go into the first team. That’s just my opinion. They’re not going to risk a young English player when they can get someone who’s made it in Europe for £50m.”

It’s a familiar theme among most of the England C squad. Many start at big names only to have to come down and start again. Sarcevic did that with Woodley before making his move to the footballing academy of Crewe.

Alongside the likes of Nick Powell and Ashley Westwood, both now in the Premier League, Sarcevic had the perfect  football education.

But, frustrated by his position at the club, he asked to leave.

“I’m never going to say anything bad about Crewe because  it was a great learning curve for me,” he says. “I wasn’t going in depressed or moping around and I’m not saying I should have been starting, but it was frustrating. That’s the word, frustrating.

“I got on the bench a few times but I just couldn’t kick on to get that starting spot. When you’re competing against the   likes of Ashley Westwood, who’s gone to Aston Villa, Luke Murphy who is flying and Nick Powell, who went to   Manchester United, it’s hard.

“I just didn’t like sitting there and watching. I was 20 at the time and I wanted to play. There are some lads who are at  clubs and get their money. But you want to be playing football. I do anyway.”

Having been at Chester on loan in the phoenix club’s first season at Step 4, Sarcevic knew he was going to the perfect home.

He says the guidance of Neil Young has put him where he is now, with Football League clubs falling over themselves to  watch his talents.

Sarcevic says: “To me Chester is the perfect club and I’ve got the perfect manager. He knows my game. He’s put me in  the centre-mid role I prefer and feel I’m suited to. It’s the best decision I made. I love the club and I feel part of it.

“I think of the players I played with at City and most of them you never even hear of now. And they were top, top young  players.

“It’s hard work that’s paid off for me and I’m pleased that I’ve done that for myself.

“The gaffer here was saying how many players have played for this England C team and gone on to the Football League.