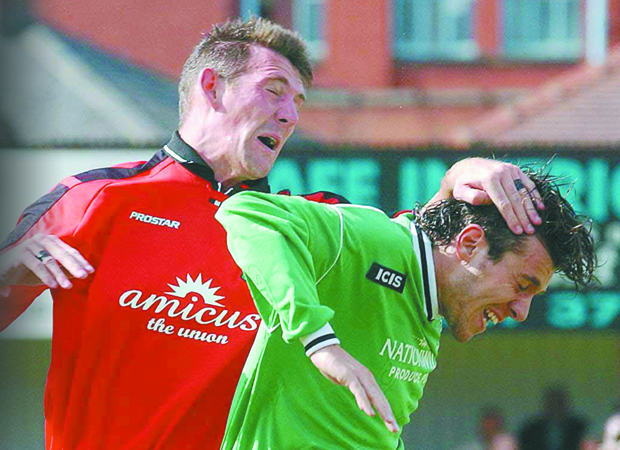 RETIRING from playing football at whatever level is tough, the question of how to fill that void come 3pm on a Saturday? afternoon is a hugely? emotional, personal poser.

Last week I asked Adam Miller whether he’d go into coaching after being forced to hang up his boots through injury.

His reply, after we’d just finished discussing his infamous strop when his hairband was thrown to the ground and he stormed straight into the gym after Mark Stimson subbed him on a hat-trick in a televised Stevenage game, was predictable.

?I couldn’t do it,” the 30-year-old replied. ?Imagine how frustrated I’d be on the touchline? I’ve got to find something else.”

And he has, creating a company – AMC Prestige Cars – leasing luxury motors to footballers in a similar way to his former Aldershot midfield partner Hugh McAuley with his Innovation Cars.

McAuley, who also played for Conwy United, Leek Town, Cheltenham, Kidderminster, Forest Green, Northwich and Burscough, set up his firm when at Leigh RMI in 2006-07. But even the chirpy Scouser says he became ?quite down” when he stopped playing six years ago, aged 30.

He had his business to concentrate on, and has successfully built it up to such an extent that the ‘Innovation Group’ now has Property and Finance divisions that, like the cars, work in partnership with the English and Scottish PFAs.

But McAuley missed that personal involvement, so four years ago he bought 41 acres of land on which his local North West Counties club, Formby, sits.

He’s now a 36-year-old chairman and his Squirrels are scampering about the pitch, joint-managers Jim Shirley and Kevin Dally preaching a pure footballing game that has led them to a club record start to the Division One season, winning six on the trot before hosting Atherton Collieries yesterday.

McAuley concentrates on matters off the pitch, however. ?We landlock Tesco and I’m trying to get them to buy a quarter of the land for a store extension so we can build the community a proper ground,” he explains.

“I’ve just spent 150,000 pounds putting a 3G astroturf pitch next to the main one, which is great for the club, junior teams and local schools to use. We’re starting up our own apprenticeship scheme as well.

?But I want to get the Formby Football Club back that my dad, Hughie, played for when he’d finished as a pro.”

In 2002, their Brows Lane ground was knocked down to enable a new swimming pool to be built, with the local council moving them to their current location on the outskirts of Formby.

Altcar Road wasn’t up to ground grading qualification in time, so they were expelled from the NWC and had to spend a season in the Liverpool County Combination.

?The old ground was in the town centre and had a clubhouse,” says McAuley. ?Because we don’t have that clubhouse now, the club lost that community feel and became stagnant, because although plans were put in, the money wasn’t available to build a new stadium.

?I took over and said if we can bring back the old days, and get the old boys back, we can build something the community can be proud of.

?It’s hard financially, but once the 3G facility is finished in a month’s time and if we can do something with Tesco, it’ll really boost the income and allow the club to stand on its own two feet.”

Family commitments mean that although father-of-four McAuley tries to attend as many games as possible, he sometimes has to “watch them on twitter,” like the 9-3 victory over Eccleshall a fortnight ago.

“I kept thinking someone had pressed the wrong button,”? he laughs. ?Jim and Kev have got a really good, young side together, so I’m really confident we can win the league this year.”

The FA Vase is also on the agenda, with a 5-1thrashing of Selby Town at the second qualifying round stage last week.
?I was talking to Kev and he asked if I fancied playing a few games,” says McAuley.? “I mentioned it to my missus and she burst out laughing. I can’t run to the end of my garden these days.

?I never played at Wembley though, so if we get there in the Vase, I’ll be registering myself and taking every throw, corner and goal-kick!”?

In Formby Football Club, a former footballer is still getting his kicks!

Rampant Reeves Has Bosses Bricking It

BRADFORD Park Avenue boss John Deacey joked about what he might have to do to make sure his former striker Damian Reeves didn’t score against them for Altrincham last Saturday.

?Reevsie still lives in Doncaster so we are going to build a wall around it tomorrow night,”? said Deacey. ?Either that, or sneak in and let his tyres down!” ?

The form Reeves is in, bricking up the visitors, a goal wouldn’t have stopped him and, sure enough, he scored twice, taking his tally to 13 for the season.

More accurately, they have come at a rate better than one every 35 minutes since he scored in the 90th minute at Vauxhall on August 25.

It’s only a matter of time before a Football League club takes advantage of the clause in his new contract that says the man who netted 44 times last year can move to that level for nothing.

I’m told Barnet are keen on giving him that chance, and the way they have started in League Two, scoring just three times in seven winless games, they’d be well advised to delve deeper still into the borough of Trafford talent pit for a potential partner.

In midweek, Mike Oates netted his 14th of the campaign as Alty’s neighbours, Trafford FC, stretched their unbeaten Evo-Stik NPL Division One North start to six games with a 3-0 win over Garforth.

Forget walls and punctures. There’s obviously something in the Manchester air that’s getting these penalty box prowlers pumped up!