KARL MARGINSON probably gulped when he first heard the news. It may have been 200 miles away as the crow flies, it may have been the National League South and not the North and he’s probably never even crossed paths with the man himself.

But if Gordon Bartlett’s near 23-year Wealdstone tenure can come to its natural conclusion, then what about one of the men – alongside Poole Town’s Tom Killick – behind Arsene Wenger as a long-serving manager in English football’s top six tiers?

Especially when you compare and consider the start made at the time of the Stones manager’s exit ten days ago.

Formed just three years after AFC Wimbledon, those who powered FC United of Manchester’s inception have looked on with a bit of envy as the Dons climbed into the Football League within nine years of their inception.

Comparisons, though, are probably unkind. While Wimbledon were set up with motivation in the shape of Milton Keynes in mind, and winning back the Football League place they suggest was stolen, United’s fuel was purely putting up a middle finger to the globalisation of the game.

Formed after a chat in a Manchester curry house, ambitions were reclaiming the soul of the game – and not getting their new club into the pit of where all those problems start.

Though off-field wrangles and inside politics have coincided with on-pitch stagnation. Just one promotion in fast approaching a decade has left some questioning if the club has already reached its final destination.

Take into account a poor start, thankfully well repaired since Bartlett left the Stones last week, and the manager who has overseen every kick the club has even made could have been quietly contemplating his next move.

It’s season number 12 for FC United and for Marginson, but there’s no sign at all of any sweeping changes about to happen.

He said: “People love to bang on about how many years I’ve been here, but it’s more of a day-to-day thing for me. As long as I’m in work tomorrow then great! 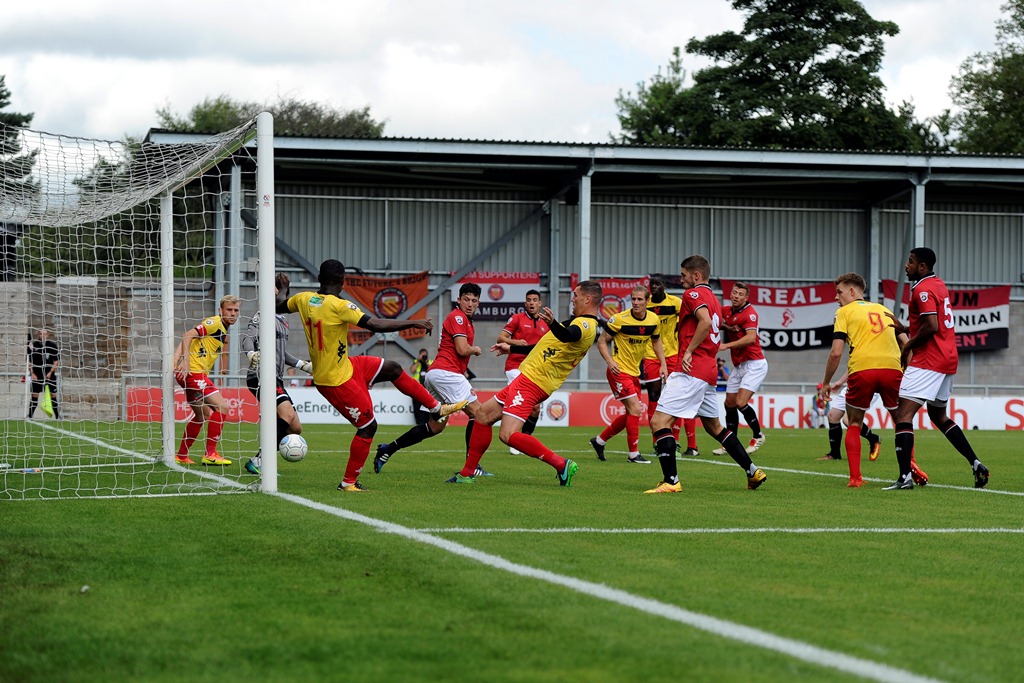 “I used to be a milkman, and then I was a fruit and veg delivery driver – being involved in the game like this is something I have always wanted. I’m not going to walk away from all that.

“It’s the challenge that we all thrive on. This year it’s a different challenge admittedly, but we just want to have a go at it.

“I still get a huge kick out of the game, it doesn’t matter if I started here in 2005 or 2015 – what’s been achieved on and off the pitch is fantastic. It’s still special, still a place people love coming to and a club still sending out all the right messages.”

No padded seats, no Dom Perignon. But Broadhurst Park, the plush fan-funded £6.5m ground built 2015, is already home. Progress on the pitch has understandably slowed with money directed towards the stadium, but at least last weekend the Red Rebels got off the mark.

“When the fixtures come out what do you look for? The big teams, the sides with the big fans base and the game you know that the atmosphere will be fantastic,” Marginson said. “They look forward to playing FC United because of what we have been able to create.

“It’s sometimes difficult to win at home because of that, but we beat Boston United on Saturday and then we got a fantastic, brilliant win at York City on Monday – things are on the up now,” he adds.

“Every single one of them were fantastic. York City are one of the top teams in this league and I was determined that it wasn’t going to be a Bank Holiday jolly.

“We may only have got one point from our first five games, but we were seeing signs of it coming together. There were a lot of changes in the summer, but that’s something I am used to doing.

“Over the past 13 seasons I must have rebuilt six or seven new teams. It’s not a challenge I’m scared of.

“The new set of players we have got are bonding really well, there’s some great characters in there and we’re learning about each other. We’re finding out what pushed their buttons and they’re trying to push mine! There’s so much ability in there. We’re too good a team to not produce.”

*This article originally featured in The NLP, which is available every Sunday.