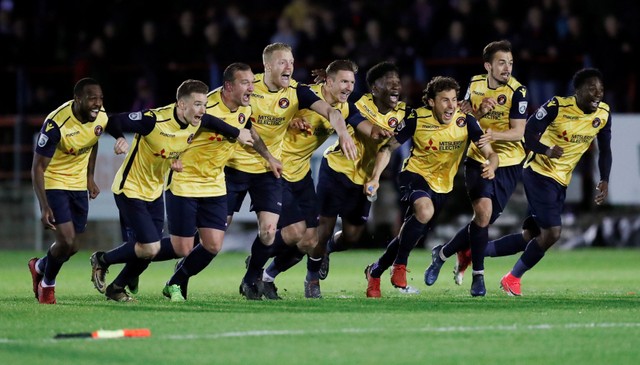 It’s crunch time. Which sides will keep their dreams of promotion alive beyond this weekend?

Our friends at Marathonbet are back with their play-off tips…

Ebbsfleet United pulled off a minor miracle on Tuesday night coming back from 3-1 down in a tense penalty shootout against Aldershot to win 5-4 and keep their dreams of securing a first ever crack at league football very much intact.

Their resilience will face a stern test as they head to Prenton Park to take on a Tranmere Rovers side that finished eight points and several goals better off than them during the regular season.

Micky Mellon’s side need to bounce back from the disappointment of almost mounting an improbable title challenge to Macclesfield, and after losing two dead rubbers to end the season, will need to refocus here. Back a noisy crowd on the Wirral to help Tranmere edge past an Ebbsfleet side still weary from their midweek exploits.

Back Tranmere Rovers to beat Ebbsfleet Utd 2-0 at 67/10 with Marathonbet.

Paul Doswell will be encouraged his side finally rediscovered some much-needed momentum with two wins to round off the season, and they could have the mental edge after dispatching The Wood 4-0 in a memorable Boxing Day game earlier this season.

A 1-1 draw at Gander Green Lane between the two just a few days later is probably a better omen for this one, and with nerves jangling, expect a tight affair.

Back a draw in the first half and Sutton United to win at full time at 9/2 with Marathonbet.

Mark Bower’s Bradford Park Avenue clearly love a trip to Midlands, securing a second win in four days at Aggborough earlier this week to dash Kidderminster Harriers’ promotion dreams. This weekend they take a short trip east to Brackley Town who, on paper, look a far stronger outfit than Bradford over the course of the season following their healthy third place finish.

Avenue have enjoyed a late season surge, however, to snatch the final play-off place and having already beaten Brackley twice this campaign, could there be a surprise on the cards at St James Park?

Back Bradford Park Avenue to beat Brackley at 27/5 with Marathonbet.

The Stockport faithful were left stunned on Wednesday night as a 1-0 sucker-punch from Chorley was enough to book them a tie with league runners-up Harrogate Town.

Matt Jansen’s side are undoubtedly a form team coming into this game, but Harrogate Town should have enough firepower to see the job through after scoring exactly 100 goals in the regular season and having had time to put their title near-miss behind them.

Back over 2.5 goals at Harrogate Town v Chorley at 22/25 with Marathonbet.

A late, late show from Hampton & Richmond over Truro City saw Alan Dowson’s side rewarded with a trip to Essex this weekend to take on Chelmsford City.

The games between these two this campaign have both been tight affairs, with Hampton securing a 2-1 win the last time these two sides met at the Melbourne Community Stadium. It could go to the wire on Sunday.

Back a draw between Chelmsford City & Hampton & Richmond after 90 minutes at 57/25 with Marathonbet.

Rounding off this weekend’s intense play-off action is a fascinating tie between Dartford and Braintree Town. The Darts will need to find a second wind after seeing automatic promotion cruelly snatched away from them by Havant & Waterlooville.

Can Tony Burman pick his Dartford side off the floor? Braintree will scent blood after knocking Hemel out on penalties to set up this tie, but a gruelling 120-minute stalemate in midweek is hardly ideal preparation for the Iron.

Dartford are deservedly one of the best two sides in this division and should prove it this weekend.

Back Dartford FC to beat Braintree at 37/50 with Marathonbet.