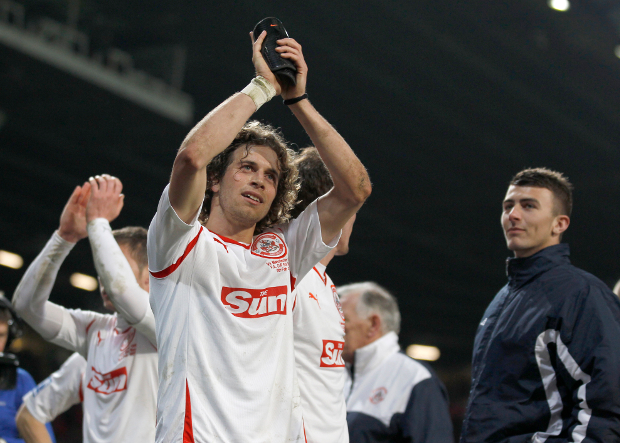 How far would you go to pursue your dream?

When 22-year-old Sergio Torres quit his job in a brick-factory in rural Argentina, his friends and family thought he was crazy. Sergio then spent all of his savings on a plane-ticket to England.

Into the unknown, with nothing more than a dream: he wanted to become a professional footballer. Filmmaker Jasper Spanjaart captures an incredible story of sacrifice and perseverance that took the Argentinian from working morning-shifts at a Boots warehouse to playing at Old Trafford, the Theatre of Dreams.

Together the two have spent over a year retracing Sergio’s steps to tell the story the story of The Unknown Torres to find out what pursuing dreams in life is all about. “Sergio Torres will always be a Crawley Town hero to me, but behind the success story is an incredible tale of determination, sacrifice and hard work.” – BBC Breakfast and Football Focus presenter Dan Walker.

The full-length film starts with a trip back to Argentina, where Sergio’s story began in a small district called El Coyunco, roughly twenty miles from the city of Mar Del Plata.

In an emotional interview, Raúl Torres recounts a time when his son worked for him in the family-owned brickfactory business. Meanwhile Carlos Aurelio, Sergio’s first ever football coach, details what happened the very first time he met the curly-haired Argentinian on a futsal court.

The Unknown Torres depicts what went into Sergio’s decision to leave his home-country for England, despite not speaking the language, having very little money and no guarantee of a job. Even upon arrival in an entirely different continent, it was far from smooth-sailing.

He endured multiple rejections, deemed not strong and physical enough for English football. Sergio: “I wanted to tell my story because I think kids, and people of any age can benefit from hearing this and be reminded of not giving up on your dream.” “Imagine that the dream you had as a kid comes true.

That’s exactly what happened to Sergio Torres. Whenever you need to smile, watch this movie. And remember – it could happen to you if you want it hard enough.” – Best-selling author Guillem Balague. The documentary project was successfully crowdfunded in February 2018 and produced independently by Jasper Spanjaart, the film’s writer and director.

The film features interviews with former Norwich City captain Russell Martin, who became Sergio’s best-friend during their time at Wycombe Wanderers, and West Ham’s Pablo Zabaleta, who speaks candidly about his own experience of leaving behind his native Argentina and adjusting to life in England.

Jasper said “At the end of the day, it’s not a football film, as strange as that may sound. It is a story about life. It conveys a message we all need to hear: no matter who you are or where you are in life, you need to do everything you possibly can to pursue your dreams.” The Documentary About Pursuing Dreams premiers at the Duke of York’s, the U.K.’s oldest running cinema on Sunday April 7 at 20:00, and is available for pre-order via www.theunknowntorres.com.