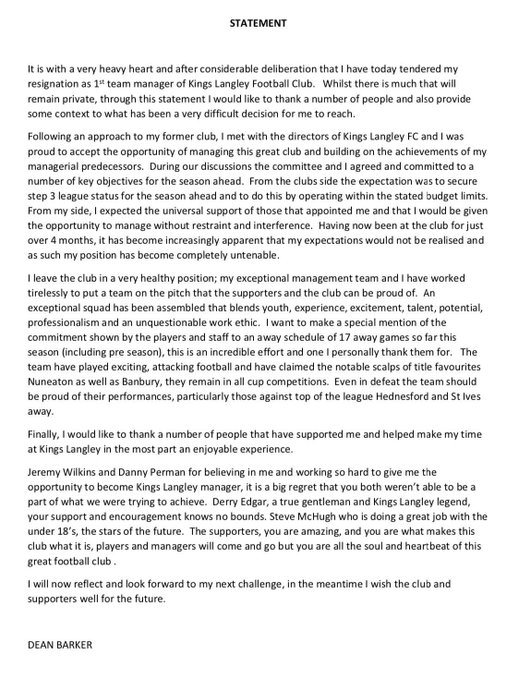 Southern League bosses were falling like ninepins before Saturday’s action with Basingstoke, Barnstaple Town and Kings Langley all left managerless.

And while Basingstoke were insisting their parting with Martin Kuhl was “a truly joint decision” and Barnstaple said Aaron Harper-Penman would remain a club ”legend”, Dean Barker walked away from Kings Langley with a bitter blast, claiming his position had become “completely untenable”.

The former Northwood boss only took over at the Southern League Premier South Central’s Kings in June after leaving Welwyn Garden City to succeed Steve Conroy.

Kings coach Ryan Jackett is expected to be in charge today (Sept 21) when the club host Folkestone Invicta at Gaywood Park in the FA Cup’s Second Qualifying Round.

In a statement, pictured, posted on his Twitter account @DeanBarker06, Barker blasted the club’s heirarchy but hailed the club’s players and fans.

He wrote: “From my side, I expected the universal support of those that appointed me and that I would be given the opportunity to manage without restraint and interference.

“Having now been at the club for just over four months, it has become increasingly apparent that my expectations would not be realised and as such my position has become completely untenable.”

It read: “Dean joined the club under challenging circumstances with the club’s entire pre-season and early league fixtures all played away from home. Dean showed exceptional resolve to overcome these difficulties to lead the team to a positive start to the season.

“The club recognise and acknowledge the unrelenting work ethic and commitment Dean has displayed during his tenure and would like to put on record their appreciation of the contribution he has made to Kings Langley Football Club in a short space of time. The club wish him all the very best in his future career.”

While the trio of bosses all fell on their swords on Thursday, the exits of Kuhl and Harper-Penman could only be described as amicable

Southern League Division One South Basingstoke insisted their parting of ways with Kuhl was “a truly joint decision” by both parties.

Dragons chairman Terry Brown told fans in a statement on the club’s website: “The term ‘mutual consent’ is often a linked synonym for the manager being sacked in football, but this is a truly joint decision. We would like to thank Martin for his efforts and we’ve no doubt that his illustrious career in football will continue.”

Appointed in November 2018 as the successor to Jason Bristow, the 54-year-old departs with Town propping up the table, having amassed one point from their six league games. Assistant manager Dan Brownlie has been appointed as caretaker and will be at the helm for Saturday’s league trip to AFC Totton while the club considers its options.

Barnstaple told fans that Aaron Harper-Penman would remain a club ”legend” after “regretfully” accepting his decision to stand down at the Division One South club.

Steve Holland was named as caretaker for today’s trip to Willand as fifth from bottom Barum begin their hunt for a new manager.

Named as the successor to Kevin Darch and Dave Griffiths in December 2018, former centre-back made his debut for the club aged 16. He went on to appear 336 times for Barnstaple, either side of a spell at Bideford, scoring 25 goals and skippering the side.

A club statement read: “The club would like to place on record its thanks to Aaron for the drive and passion that he has brought to the role since taking charge in December 2018.

“Aaron will always remain a legend at the club, making well over 300 appearances including as a player and captain of Barry Yeo’s all-conquering side that achieved double promotions from Western League Division One to the Southern League.”