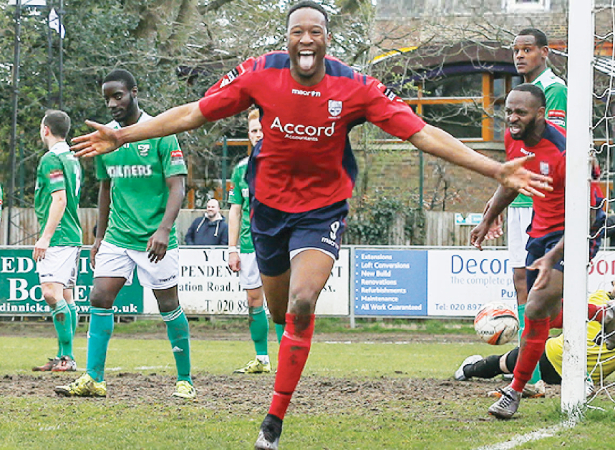 Kabamba, 23, had a number of National League and League Two sides chasing his signature after an impressive first half of the season with Hampton.

He had scored 22 times in all competitions for the Beavers and will now be looking to take that form into the Football League after putting pen to paper on an 18-month deal with Pompey after both clubs agreed on an undisclosed fee.

Kabamba’s former strike partner Lowe made the same move at the beginning of the month after the pair helped fire Hampton towards the top of the National League South in their first season back at Step 2.

Now Kabamba has quit his job working at a car rental company to pursue his dream as a professional footballer with former FA Cup winners Portsmouth.

He told Hampton’s website: “Being given this opportunity to become a professional footballer is brilliant and Portsmouth will be a great club to be at. Playing in front of 15-16,000 incredible fans like theirs will be amazing.

“I’m an ambitious person, and I always want to do better, to push myself further to see how far I can go, and I’ll be the same at Portsmouth.

“I will never be able to forget my time with Hampton. This club has been the major turning point in my career so far. They gave me my confidence back and I started scoring goals again, I’ve had my best season ever and I owe it all to Hampton. I’ve learned a lot from the coaching staff and they brought the best out of me.

“Compared to other teams, they may seem like a little fish but they have a great management staff, great people following it, and its been a brilliant club to be at, as they make you feel so at home.”

Boss Alan Dowson added: “At the start of the season there were a number of clubs interested in signing both Nicke and Jamal and I shook hands with both players in agreement that if they signed for us and an opportunity came along to move into the Football League, we would not stand in their way.

“I am a man of my word, and when the opportunity arose we willingly allowed the players to enter into negotiations.”