MUCH LOVED: Lee Collins was a hugely popular figure at Yeovil Town as the floral tributes outside Huish Park showed, inset
PICTURES: Pinnacle and Alamy

THE football world has united in sympathy for Yeovil Town’s club captain Lee Collins, who tragically died this week at the age of 32.

Tributes have flooded in for the former Wolves academy defender with fans, teammates and former managers all paying their respects.

Collins’ sudden death was announced on Thursday with minutes’ silences held at football grounds across the country on Good Friday in his memory.

Yeovil’s game against Altrincham was postponed as a mark of respect, and among the teams to participate in silences remembering Collins were his former clubs Forest Green Rovers, Northampton Town and Port Vale.

Floral tributes have piled up outside Yeovil’s Huish Park home, including a message believed to be from manager Darren Sarll, describing him as a “leader of men”.

Collins’ partner Rachel Gibbon took to social media to give her tribute, describing him as her “best friend, other half and go-to”. 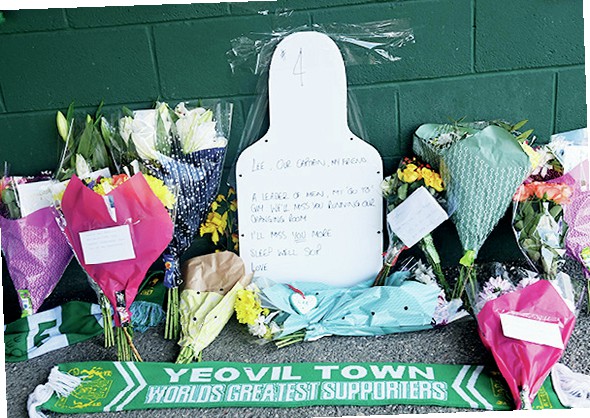 Expressing her thanks for all the messages of condolence and support, she wrote on twitter: “Lee Collins. You’re their captain, their leader, their champ.

“You’re my best friend, my other half, my go to.

“I don’t know how to do this without you but I promise, I’ll give it a good go for our girls.

“Thank you all for kind messages, wishes and thoughts.”

Dozens of football clubs have already responded to the news. Northampton Town manager Jon Brady fought back the tears when dedicating Friday’s League One victory over Shrewsbury Town to him.

“It’s been a very emotional couple of days,” he said. “My assistant, Marc [Richards], was his best mate, and it hurt Marc a lot today. It’s tough to take.”

Chesterfield manager James Rowe said after Friday’s win at Eastleigh:“Four of our lads played with him at Forest Green and Yeovil and it really has come through the group the pain. 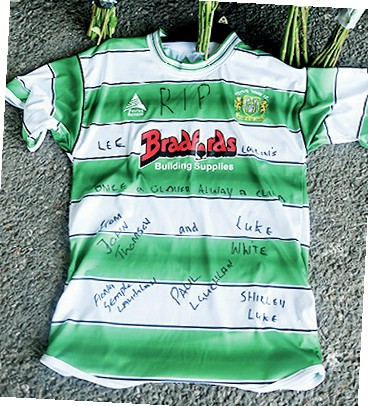 “It’s a really horrible thing to hear and we wish all his family and friends all the very best in this difficult time.”

Radford tweeted: “Shocked and saddened to learn of the passing of our former defender and captain, Lee Collins. A no-nonsense, battling braveheart on the field and a gentleman off it. A man who always gave his all in Stags’ colours.”

Collins’ former Wolves teammate Karl Henry added: “Such sad news. I remember Lee as a young player at Wolves. He was a good lad with a great attitude. Sending my condolences to his close friends and family. Rest in peace mate.”

Brentford striker Ivan Toney, who played with Collins at Northampton, said: “Such sad news. A former team-mate always helped me as a young boy coming through. Thoughts go out to his friends and family at such a difficult period.”

Police are not treating the death as suspicious.