FORMER Football League ace Danny Kedwell has been given his first shot at management – at Cray Wanderers.

Kedwell enjoyed a glittering 20-year playing career, yielding over 250 goals, while achieving a UEFA A Level coaching badge along the way.

Kedwell, who will also register as a player at Cray, is a well-known figure in Kent football, turning out for a plethora of of clubs in the county before earning to a move to AFC Wimbledon in 2008. 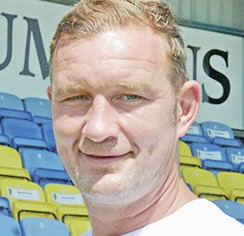 In three seasons, he scored 67 goals and helped take the Dons into the Conference and, in 2011, scored the winning penalty in the Conference play-off final against Luton Town to earn the Dons promotion to the Football League.

This alerted his home town club Gillingham to sign him before the start of the 2011-12 season and spent four seasons with the Gills scoring 40 goals in 119 appearances.

Kedwell then moved back into the Non-League game with a big-money transfer to Ebbsfleet, where he learned hero status in four seasons at Stonebridge Road, before switching to Havant & Waterlooville in 2019.

Under Russell, the Wands – regarded as London’s oldest football club – enjoyed a superb first season back at Step 3 in 2019-20 with a second-place finish in the null-and-void Isthmian Premier Division.

They then won five out of their seven matches in 2020-21 when this season was curtailed.