“I know how the managers of Harrogate Town and Concord Rangers will be feeling on Monday and the bosses of Hornchurch and Hereford in a few weeks’ time,” says the 59-year-old who led York City to Wembley victories in 2012 and 2017.

“This is Non-League’s top cup competition, the grass roots equivalent to the FA Cup, and it’s already a fantastic achievement to get there when you consider the numbers of teams who take part.

“It’s great for managers, clubs and the places they represent – but they don’t need me to tell them, Wembley is much better when you walk away with the cup.”

Mills burst into the football world by becoming the youngest starter in a European Cup final when he played for Brian Clough’s Nottingham Forest against Hamburg in Madrid at the age of 18.

But the Corby Town manager says he is every bit as proud of his achievements as manager of York City after falling in love with the FA Trophy at Grantham Town – his first job in management. 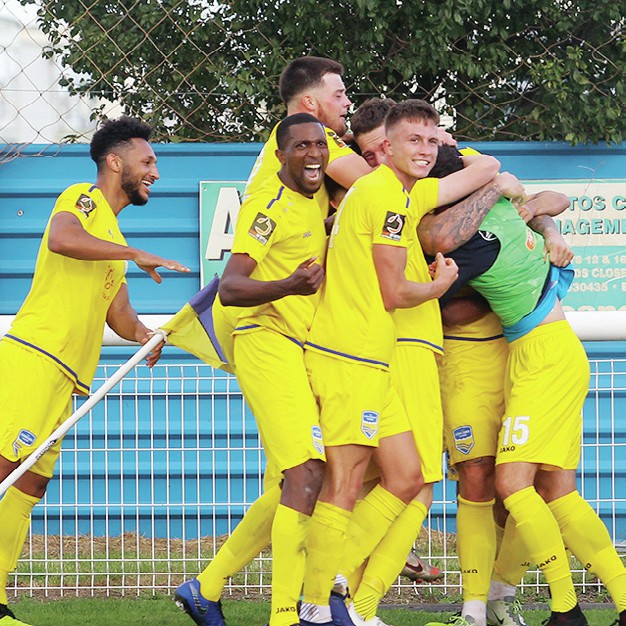 “We won through a couple of rounds in my first season, then reached the quarter finals – and both times it had a big impact on me and the club,” he said.

“We had three bites at the cherry before causing an upset by beating Blyth Spartans, but my main memory is of the initial 1-1 draw.

“We were 1-0 down against a team with John ‘Budgie’ Burridge between the sticks before we equalised in the last 30 seconds. Secretary Pat Nixon was jumping and punching the air in celebration, then George Freestone walked into the dressing room whilst I was talking with the lads. At first, I wasn’t pleased, then he said he was giving everyone a fiver as a reward.”

That love affair with the FA Trophy blossomed during two contrasting spells in charge of York.

“A week after we beat Newport 2-0 at Wembley in 2012, we went back to Wembley and won promotion back to the Football League through the play-offs,” he adds.

“The second time was just after we had been relegated but that didn’t take away from a fantastic day when we beat Macclesfield 3-2.”

Mills’ own 2020-21 season ended very prematurely with Corby ’s 2-1 FA Trophy defeat at the hands of Hednesford Town on November 1 – the day Prime Minister Boris Johnson announced new lockdown measures. But he is delighted the competition extended the campaigns of Concord, Hornchurch and Hereford.

“They’ll love being written off and use it as an incentive to show the football world why they have got to Wembley,” Mills said. “I watched the highlights of Hornchurch’s victory over my old club Notts County. That tie was at Meadow Lane rather than Wembley but winning there was a fantastic achievement in itself.

“Manager Mark Stimson is a Trophy legend having led teams to victory three times, but it will be every bit as special going back there again.

“I’ve been around long enough to remember Hereford United’s amazing FA Cup exploits and the story of the new club is great.

“I like to see former Football League clubs on the way back and they’ll be looking at this final as a springboard for the future.”

Mills concedes he is perplexed why the Trophy is undervalued in some eyes and holds up this year’s finalists as good examples of what the competition can do for a club.

“Harrogate were a National League club when their run began and I know how it feels to win a couple of games with a leading club in the Trophy and suddenly feel you’re not that far from Wembley.

“I’ve managed a couple of clubs where I was told the Trophy wasn’t a priority.

“My response was always that the competition was a priority for me and I always selected my strongest possible side. Now I’m hoping for two games to match the showpiece occasions.”

GARY MILLS writes about his love for grass roots football in his autobiography Young Millsy with Non- League Paper reporter John Brindley due out in October.