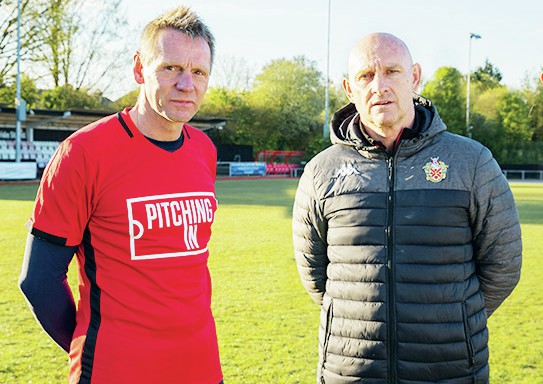 The Urchins, who play in the Pitching In Isthmian Premier Division, stunned National League Notts County on penalties in the semi-finals and will meet sixth-tier Hereford in the FA Trophy showpiece on May 22.

Pearce cut his teeth for Wealdstone in the non-league game and enjoyed a two-hour session to savour with Stimson – a four-time FA Trophy winner as a player and manager – and his buoyant Hornchurch squad.

The current West Ham No.2 shared all his Wembley wisdom and reckons a victory under the Arch would make them permanent non-league A-listers.

The 59-year-old, whose side train just over four miles from Hornchurch and who attended the session as an ambassador forPitching In, said: “If you put this achievement into a film, you would say it’s a little bit far-fetched – but they’ve achieved that. Hopefully, they’ll go on to win the final.

“It’s been brilliant for me to come and meet the manager and players. You name the whole spectrum of it – I don’t think there’s been any club in world football who’ve had a cup campaign like this, over the duration they have, with no league football to keep the players fit.

“Wembley is the holy grail for a non-league player. If I was sat here solely as a person who’s only ever played the professional game, I probably would have hollow words.

“But I know what it meant to us at Wealdstone – and I know how big it is to win the trophy. There’s no better place to play football than Wembley.

“It may well be the best day of their lives for these players out there, so don’t miss the opportunity.

“Going out and playing at Wembley, with fans in the crowd – for me, there’s nothing better. If you’re a professional footballer, where do you want to play? You want to play in major finals and as a non-league player, the Trophy is the major final.”

Pearce’s surprise visit was organised by Pitching In, a grassroots and non-elite sport investment programme set up by Ladbrokes with the support of its owner Entain.

The evening saw the 78-cap England international give a pep-talk to Stimson and his players, answer their questions and disseminate his insight after a storied football career.

The Pitching In partnership has been a game-changer for clubs like Hornchurch, whose season was curtailed earlier this year as the coronavirus pandemic reaped a devastating impact on the non-league football calendar.

Hornchurch have continued to play through their thrilling FA Trophy run, however, toppling the higher-tier might of King’s Lynn, Darlington and Notts County to navigate their way to Wembley.

Urchins ace Liam Nash is the competition’s top scorer this season and after meeting Pearce, the red-hot striker, 25, said: “It has been brilliant to have Stuart here.

“He’s a legend of the game. He has given us an insight into the Wembley experience and how to manage such a big occasion for the club and players like ourselves. None of us could have ever dreamed of playing at such a place.”

And Hornchurch boss Stimson, 53, added: “It’s been a fantastic surprise having Stuart Pearce turn up.

“We’ll take what he says it on board, go away and think about it – and that will help us on the day. For him to come and spend the evening with us is fantastic and much appreciated – not just for the players, but for the football club.”

Entain, owner of Ladbrokes, has launched a multi-million pound investment programme, Pitching In, designed to support and promote grassroots sports.