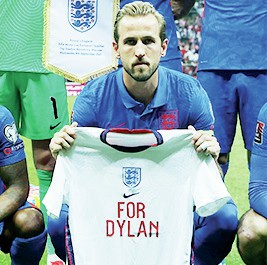 Dylan was taken seriously ill during the game at the club’s Regatta Way ground on September 2.

Attempts were made to resuscitate Dylan on the pitch using a defibrillator as the game was abandoned. He was taken to Queen’s Medical Centre in Nottingham by ambulance but passed away last Saturday.

Kane held up a shirt with the words ‘For Dylan’ emblazened before the start of Wednesday’s World Cup qualifier 1-1 draw with Poland.