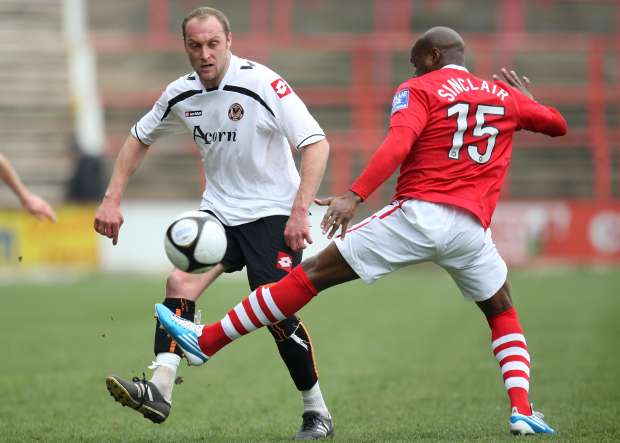 VETERAN striker Charlie Griffin has simply been told to keep Cirencester Town in the Southern Premier after being handed his first managerial job.

The Centurions were expecting North Leigh boss John Brough to become their new manager but he made a late U-turn to leave Cirencester still searching.

Former Cheltenham Town skipper Matt Taylor, now head coach of the football team at Hartpury College, was in the running but chairman Steve Abbley has turned to a familiar face in Griffin.

Griffin, 37, signed for the club from Chippenham last summer and netted 26 times to prove he still has it at Step 3 level.

However, the forward will now require a whole different skill set as he gears up for his first job in football management with the struggling Centurions.

They currently sit third bottom of the Southern Premier with just three wins from 11 games although Tuesday night’s victory at Basingstoke – overseen by caretaker Jody Bevan – will give Griffin something to build on.

Chairman Abbley told the Wilts and Glos Standard: “I interviewed Charlie for the second time this week and I was very impressed with his enthusiasm and his real desire to do the job.

“He has a tremendous knowledge of local football, he has coaching badges, and he has the respect of everyone I have talked to.

“We are going to take it step by step and I have just asked Charlie to keep us in this league. If he does then we talk about a two-year deal.”

Abbley also confirmed that he has agreed to a temporary budget increase to give the new manager room to make changes to the squad.

“I’ve agreed a spike in the budget until Christmas, but Charlie will have to get it back to normal afterwards,” the chairman added.

“In all honesty we probably need one or two centre halves, a centre forward, a winger and a full back. So we will be bringing players in and shifting some out.”