PAUL WOTTON says signing a long-term deal at Truro City this week was a “no-brainer”.

The 43-year-old led the White Tigers to the top of the Southern Premier South table when the season was suspended back in late October.

Last month, the Cornish club announced they have moved out of their long-standing Treyew Road home and will groundshare with Step 5 side Plymouth Parkway, 56 miles away, while the new Stadium for Cornwall is built.

But while fans reacted with anger at the move, Wotton’s commitment to the cause has given the club stability and the former Southampton and Plymouth Argyle player is delighted to be given the opportunity to lead the charge. 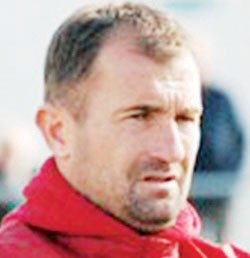 “I’m excited, it shows the club’s intent and how forward thinking they are,” said Wotton, who was appointed back in the summer of 2019. “I’ve committed to them and they’ve committed to me. It’s all good, it’s exciting.

“I’ve been here two seasons now, which have been really frustrating seasons and hopefully we’ll never see ones like it again, but I feel like there is some unfinished business.

“The club’s in a great place now with the owners and the new stadium being built. It’s my job to try and get a decent team on the pitch.

“Once I knew the direction the club was going on and off the pitch and knew I had the continued support; it was a no brainer for me.”

No length of time has been specifically given on Wotton’s new deal – club consultant Alex Black is just delighted to get his man.

“He has had a positive impact both on and off the field and we believe he is the right man to lead us into our brand-new stadium,” he added.

“We have big plans here at Truro and Paul is integral to what we want to achieve.”