Posted on 15th May 2020 by admin in Featured, Features with 0 Comments 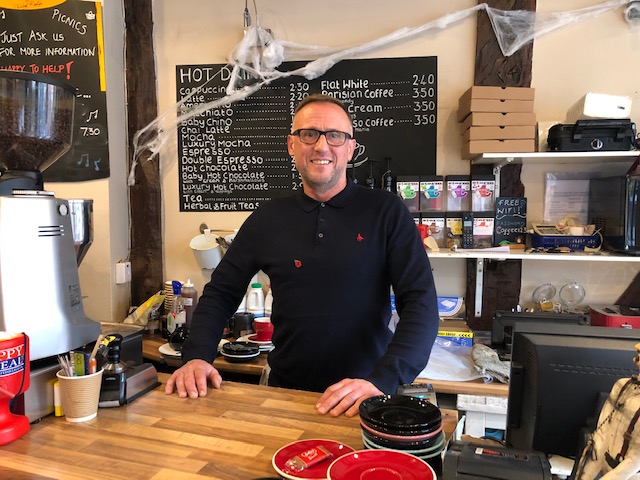 When Mark Yates retuned to the dug-out with Stourbridge at the end of February, he did so refreshed and with a different outlook.

The former Kidderminster Harriers, Cheltenham Town and Solihull Moors boss felt a bit of recharge was just what he needed as well as a different challenge outside of football.

“There are so many managers out there nowadays – when a job becomes available, the number of applicants is staggering,” Yates, who left Kiddy last April following a short second spell at the club that launched his managerial career, says.

“I took time out. We bought a coffee shop and I just felt the break would do me good. I didn’t want to be solely reliant on getting a job in football. I’m a bit older now, I love my football and I’m really enjoying my challenge at Stourbridge. But you’ve got family, kids, and when you’re a manager and there are only so many roles out there, you can be out of work for a period of time. It can be demoralising.

“Buying the coffee shop, getting stuck into that and a new challenge in my life was just what I needed. Then the perfect thing with the coffee shop and working alongside that was a club like Stourbridge.

“Well-run, stable, I’ve known the chairman Andy Poutney years. It’s a club he wants to take to the next level. They do it properly from the academy through to the first team. They’ve got a great fanbase, a great rapport with their supporters. They’ve had many success with Gary Hackett over the last ten years.

“It was the perfect opportunity. Bringing in my assistant Neil Howarth, who has been with me a number of times before, we know we work well together. Then bringing in Gavin Hurren, Trigger, who has played at this level for a number of years and knows players has really been great.

“Neil and I have known each other 30 years and we speak a lot about football. Gavin’s reinvigorated that in us. He’s constantly on the phone talking about this player, that player and what we want to do. It’s been great and I’m just keen to get going again. Otherwise, it’s just walking the dog, keeping fit and trying to stay healthy and safe.”

It’s been a strange time to get back into management. Yates took over Southern League Premier Central Stourbridge at the end of February and took charge of just one game and four training sessions before lockdown.

Appointing Yates is a real coup for the Glassboys. Only last season he was managing in the Football League having guided Solihull Moors away from near-certain relegation the campaign before.

But his Football League return with Macclesfield Town was short-lived – the club in disarray behind the scenes – and despite the stint at Kiddy, he’s used the time to learn his new business, Piccolos.

“I work serving the customers some days but it’s also about stock and learning a fair bit about the business side of it,” Yates says. “I’ve enjoyed that.

“It’s been good for me. It’s been what I needed. A different challenge in the business world. It’s dealing with people, your customers – I think I’m a people person anyway so working there has been good for me. We get some nice regulars who come in a lot. I ring quite a few of them to see if they’re all fine now and everything is OK. It’s in a nice place in Bewdley and been enjoyable the last year.

“Again, it’s like football where we’re waiting for answers. But my view is coffee shops, cafes, restaurants, pubs, are probably going to be the last ones to carry on again. So far the government have helped our sector and given us backing.”

Yates is level-headed about the current situation for football and his own business. He’s having regular calls with the club and chairman Poutney but like all managers, is having to feel through the dark of not knowing when Non-League football can realistically start up again.

“I’m talking the bigger picture, it gives a chance for football to reassess,” he says. “Are they going to get the crowds – certainly not to start with. Football is a massive attraction.

“Obviously at the top level it is funded by TV deals that are staggering. At the next levels it’s a lot of sponsorship and people do a great job attracting great sponsorships. But everybody is affected by this pandemic. Are businesses willing to put money into football as much as before?

“So I think there will be a reset but I don’t think that will be particularly bad for the game. Wages are ridiculously high. That’s fantastic if that’s you earning that money but times like this does get people thinking a little but and football has a chance to reevaluate itself and hopefully be stronger.

“At our level, I was talking to the chairman earlier, and crowds are everything. They are the lifeblood of clubs like Stourbridge. We need people through the door. It’s a big part of our budget. Hopefully clubs are looked after and also clubs are looking after themselves. Hopefully football can come out of it in a stronger position.”

Yates has enjoyed success in his career and hopes that can continue at Stour, who have high ambitions. Has he, himself, still harbour hopes of returning back to an EFL dug-out?

“I lost a couple of jobs a couple of times,” Yates says. “It was important at my age I wasn’t moping around waiting for the next manager to lose his job.

“That’s the decision I took to invest in something different. It was the right time to do. Of course I’ve got ambition but what is ambition sometimes?

“I’ve had a little reset. I’ve got a great home – a great support network be if you can have a bit of enjoyment and success for Stourbridge then that will do me at the moment.”