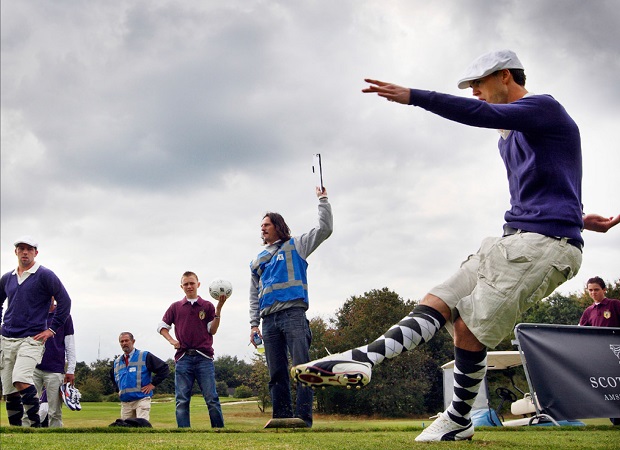 RORY MCILROY’S UK Open win last week is sure to spark interest in golf but if kicking a football is still more your thing you can combine both and play one of the fastest growing sports in the country – FootGolf.

McIlroy’s two-shot victory at Royal Liverpool meant he got his hands on the famous Claret Jug but more and more people are taking to the tee with a football!

FootGolf does exactly what it says on the tin with men, women and children of all ages aiming to kick a football into a hole in as fewer shots as possible.

Normally played on golf courses, UKFootGolf recently opened up the first dedicated FootGolf facility in the world but there are over 40 other courses across the UK.

Their centre of excellence in High Milton, Doncaster is open seven days a week to beginners and experts alike and UKFootGolf academy manager Bryan Hughes – the former Birmingham and Charlton midfielder who is now player-assistant at Scarborough Athletic – only sees the sport’s popularity rising even further.

Bryan Hughes during his time in the Premier League with Charlton

He said: “We have opened our centre of excellence in High Milton in partnership with Doncaster College. It’s the world’s first so it’s a big accolade for us.

“Because we’re partnered with the college we’ll be going out and doing some coaching. We’re also hoping to get some more qualified FootGolf coaches around the country.

“At the moment we have over 40 courses in the UK. By the end of this year I imagine we’ll be touching between 60 and 70 and by this time next year we’ll be heading towards 200 hopefully.

“They have courses all around Europe and over 200 in America. The sport is open to men, women and children so it’s very fun.”

As a former Premier League player, Hughes says the sport can benefit footballers with their technique and passing skills and expects more players to get involved.

“With out new facility in Doncaster we have a lot of Non-League and professional clubs within 30 minutes of us,” Hughes, who is still returning from a broken leg suffered towards the end of last season, added.

“It’s a lovely part of the country and we’ll be opening it up to the footballing world for bonding days but it can also be used to help with your technique and weight of pass.

“We’ve had a good pre-season at Scarborough and we’re all looking forward to a good, positive year.”

This article first appeared in The Non-League Paper on Sunday, July 27