By Ian Ridley
There is no getting away from it. It was ugly and unacceptable. Now Jamie Carragher has been suspended until the end of the season from Sky Sports following video of him spitting at the car of a Manchester United fan who was goading him about Liverpool’s 2-1 defeat last Sunday, the incident made worse by the fact that a young girl was in the car and clearly upset.
Having seen players, and ex-players, roundly abused from Non-League right up through the pyramid into the Premier League, I tweeted in the aftermath of the episode that while not certainly condoning Carragher’s actions, it is shocking what many who are, or have been, involved in the game have to put up with.
Back came responses, mixed as ever. Some agreed, but many pointed out that all the car driver had done (though filming while driving is another matter altogether) was to repeat a scoreline and wasn’t abusive.
It’s a fair point, but I understand from a good source that this was a final straw for Carragher.
He has been unable to say it himself, because it would look like he is justifying his actions, but he had been subjected to abuse a couple of times just before this incident and this time he snapped. It wasn’t the content of the goading, or the trolling as it is called on social media, it was simply the act.
The higher in the game you go, the more, and louder, the abuse is. That’s stadium noise, not the anonymous proxy abuse of the internet.
Players and managers there, are surely not as exposed to it as they are at lower levels, however. In Non-League, everybody can hear you scream.

Now, nobody worries about the good-natured exchanges between players, managers and crowd. The sarcastic comment from behind a dug-out, the ribbing of a goal-keeper by home fans, is all part of the experience from Step 1 down.
Keepers, even referees, either learn to block it out or to engage with the fans concerned to defuse situations. And some of the funniest chants and remarks I have heard in the game have been uttered by small-club supporters towards hapless players who just have to laugh themselves.
I mean, who can fail to enjoy that age-old shout designed to put off the goalkeeper as he takes a goal kick?
The language, even for that, is of course worse these days but I guess we have come to expect that as long as it’s within reason. The real problem is when it turns personal, sinister and vicious. Mostly, it is under control in the Non-League game but I personally have noticed it worsening in the last few seasons.
The self-restraint of professionalism by those in football means they shouldn’t respond, as Carragher did. After all, certain other professions in the public firing line, like those in A and E on a Saturday night, probably get it worse.
But it’s also worth remembering when venting the frustrations of the day, or the working and domestic week, that players and managers are human too and have a breaking point.
Quite simply, when it comes to verbals – physical acts being quite another matter – anyone dishing it out should keep it within the bounds of what they would be willing to take in return.

And then there were three. To Jamie Vardy in the England squad, add two more who have graced the Non-League game, in Nick Pope, the Burnley goalkeeper, and Alfie Mawson, the Swansea City centre back.
Pope began with Bury Town before, while at Charlton, having spells with Harrow Borough, Welling United, Cambridge United and Aldershot Town. Mawson played for Maidenhead, Luton Town and Welling while on the books of Brentford.
Credit to them. They have shown what is possible to legions in the National League if hard work and persistence is allied to talent.
There will be some who lament that England must be so short of talent that they have to pluck players from outside the big clubs, ones who had to drop into Non-League to get a game.
Then there will be those of us who appreciate this country’s depth of talent – and depth of the game – which could produce even more if scouting systems were better, professional clubs more adventurous and some of these players were given the chance of full-time training.

There have been plenty of gags about Salisbury in the last fortnight in the wake of events there, including one of our own fans posting this picture on Facebook and suggesting it was our new away kit.
All joking apart, these have been tough times for the lovely cathedral city we at Salisbury FC are proud to serve but just as everywhere else there, we are open for business, as our game against Taunton Town on Saturday illustrated. We don’t give in that easily. 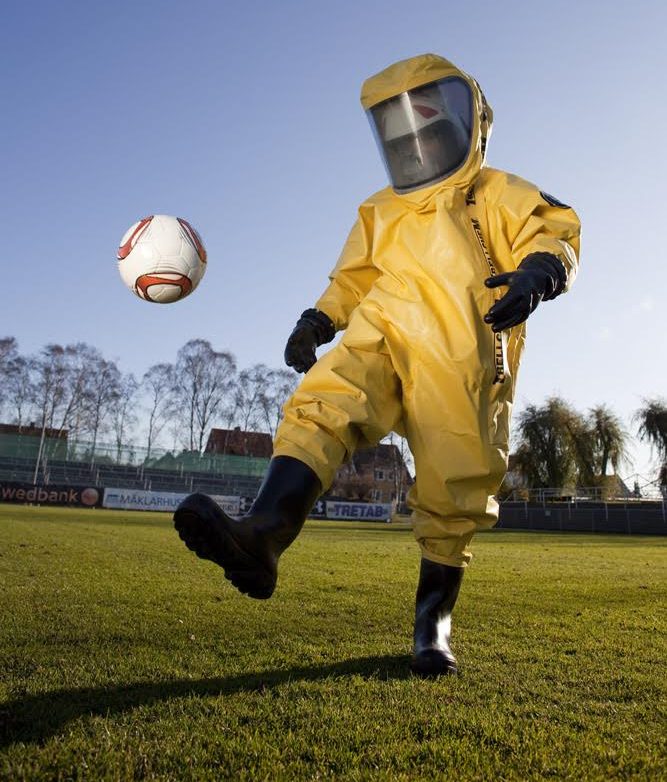 A while back, this column warned the property developers who own Dulwich Hamlet to beware the mobilisation of supporters.
Much water, from rain and melting snow, has passed under the bridge since then and Meadow have indeed been subjected to an effective reaction by Hamlet fans – and the Non-League game beyond – protesting at the way their club has been treated.
And how good to read this week a statement by Peter John, leader of Southwark Council, about “delivering much needed housing in Southwark and supporting the future of Dulwich Hamlet, which we all feel passionate about”.
He added: “We will not stand by and allow a valued community asset to be threatened or used as a ‘bargaining chip’ in order for any developer to obtain planning consent. We are not impressed by threats or aggressive gestures.”
There you have somebody who gets it – “a valued community asset”.
Wouldn’t it be great if more local councils saw their Non-League clubs the same way. Or rather showed they did rather than said they did, by backing them with action and not just words.

So many postponements.
One in the South West Peninsula League between St Dennis and Ludgvan, according to a tweet by the league, was because: “a giant snowman on the pitch has not helped the thawing process.”