His biggest regret is not fulfilling his promise at Tottenham, then he just missed out on Bournemouth’s glory dash to the Premier League, but Shwan Jalal is finally on the verge of achieving something big with Macclesfield Town.
Here, the highly-rated goalkeeper tells his Gateshead rival of his journey in the professsional game and reveals what is making the Silkmen tick at the top of the National League table…

Shwan, Goalkeepers are known to be a bit on the mad side, and you’re definitely on that side! What made you become a goalie?
I started playing football at the age of seven. I had a good left foot and was tall so the manager played me on the left wing. My downfall was that I didn’t like running so the writing was on the wall I guess.
At 12, the opportunity came up to play in goal as our regular keeper broke his leg, so I said that I would fill in for a game. I enjoyed it so much I knew it was what I wanted to do. This was the era of Peter Schmeichel and David Seaman, so I loved trying to copy what they did.

What do you enjoy about being between the sticks?
I enjoy the responsibility of being in goal and the fact it is a specialist position that makes you different to the rest of the team.
Obviously if you make a mistake then nine times out of ten it will result in a goal and you’re the villain, however equally you can also be the difference and win your team the game or rescue a point.
Mentally you always have to be alert and I don’t think some people realise how tough that can be.

You’ve had a really good career, you should be proud of yourself but who has been the best goalkeeping coach you’ve worked with?
I’ve had the privilege of being coached by Pat Jennings and Hans Segers at Spurs. Two completely different types of coaches. Pat was really relaxed and passed on his words of wisdom whilst Hans was 100mph and in your face all of the time, but they both wanted the best for you.
However, the best coach I ever worked with was Neil Moss at Bournemouth. We were together for almost six years and he really took my game to the next level. He didn’t try to change my technique but just tried to make me more consistent. We are good friends off the pitch so that helped a lot too.

Things are going really well at Macclesfield at the moment, why do you think this is the case?
I think it is a mixture of everything. We have a really small, tight-knit group of players who all get on really well and the manager (John Askey) knows how to get the best out of all of us, both individually and as a unit.
We also have a really good blend of young and experienced players with the likes of Danny Whitaker, George Pilkington, Keith Lowe, Jared Hodgkiss and myself who are all over 30.
The gaffer has created a real siege mentality in the dressing room and training is always lively and competitive. I think that is showing in our matches. I can’t speak for myself but people always comment on the high fitness levels of our players. 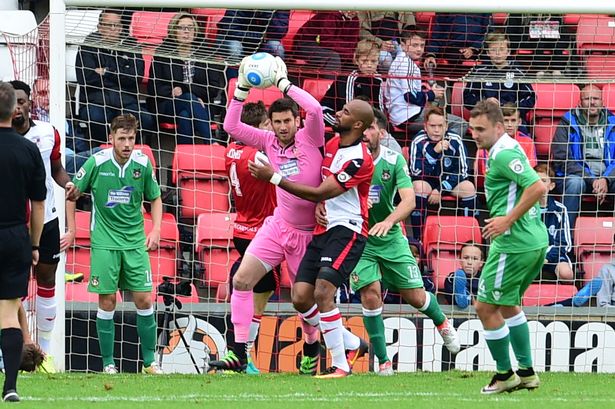 You had a long period at Bournemouth, what were your memories of the place?
I loved it at Bournemouth, the place was an amazing location to live in and I miss it hugely. I am still in touch with people down there and my son James is a massive fan of the Cherries. He was born there and lives and dies by their results every week.
I was so lucky that we experienced so much success in that period of time I was there and the changing room atmosphere at Macclesfield now reminds me a lot of how it was back then.
To experience two promotions, achieving the great escape after being on minus-17 points and a play-off semi-final is something I look back on fondly – and talk about way too much!
It gives me great pride to see the club doing so well in the Premier League. I’m only slightly jealous!

Eddie Howe is one of the best upcoming managers around, could you see it turning out the way it has for him when he first came on the scene?
Eddie was first-team coach when I first joined the club and you could tell instantly he knew what he was talking about.
The manager back then was Kevin Bond and he gave Eddie the responsibility of doing the team’s set-pieces. He was absolutely meticulous with it.
It was no surprise to me that the club turned to him eventually. He raised the bar everywhere around the club. Training, diet, attitude. He pushed us all to be better players and people. His desire to win and be successful is second to none.
Don’t for a second be fooled by his calm demeanour, he is ruthless and I was on the end of a few of his hairdryers in my time. I firmly believe he will go on to manage one of the ‘big’ clubs and eventually England.

Life after football?
I am planning already. I have my UEFA B coaching badge and am currently studying for a degree in Broadcasting and Journalism. I’m really interested in the business side of football and it is a route I would like to pursue in the future.

Best mate in football?
I’d probably say Jimmy McNulty, who is at Rochdale. We played together at Bury for seven months, but we still keep in contact regularly and are doing the same degree.

Biggest regret in the game?
My biggest regret is not doing everything I possibly could to make it at Spurs. I picked up a few injuries in my time there but I think that was probably more down to my lifestyle off the pitch.

Best football tale?
Peterborough United had agreed to my transfer request and Barry Fry had a tip-off that Neil Warnock wanted to take me to Crystal Palace as back up.
So I was summoned to his office where he explained the situation and told me to sit down while he phoned Mr Warnock. Darren Ferguson the manager was also there.
I watched on while Barry spoke on the phone to Neil… “Neil, it’s Barry! How are you mate? Yeah I’m good, I’m just ringing up about the boy Jalal who your goalkeeper coach Jim Stannard just phoned me about.”
I’m sitting there thinking, ‘Oh my God, this is happening, I’m going to Crystal Palace!’
Barry carries on with the conversation: “Yep!…..Yep Neil great, I’ll speak to you soon, be in touch ASAP!”
So he puts the phone down and looks at me with a massive grin on his face….. “Sorry son, he hasn’t got a clue who you are,” he smiled. “But he did ask about George Boyd’s availability!”