Home / Features / Columnists / Kick it out for good!

Kick it out for good!

Posted on 21st December 2018 by admin in Columnists, Features, Matt Badcock with 0 Comments 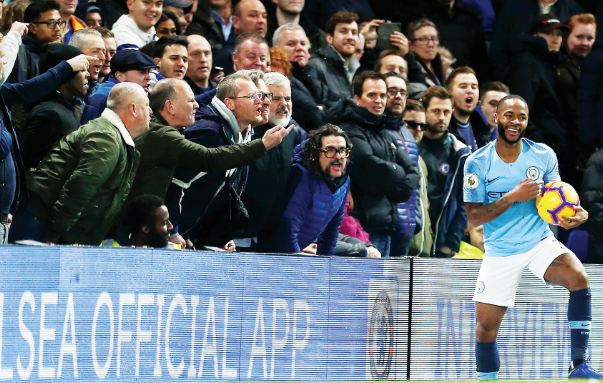 At first, the most striking thing is the pure venom and anger on the face of the so-called Chelsea fan as he spits vile abuse at Raheem Sterling.

Most people have seen the footage by now of a group of middle-aged men, eyes bulging and veins popping, screaming at the Manchester City and England youngster a few weeks ago.

But it’s on the subsequent viewings you can see why the racism allegations against this one particular individual have come to the fore. The perpetrator claims he said ‘Manc’ – arguing he knows the TV cameras often focus on that corner of the stadium so why would he say ‘black’, which it sure does look like he said.

In the days since there has been plenty of comment as football, the media industry and the wider society took
a hard look at itself. Why is Sterling, one of the brightest talents in this country, seen as fair game across the board?

I’ve never been racially abused. I don’t know what it feels like and it would be an insult to pose in this column the impact it has as if knowing the true extent.

But, working on this paper, I’ve spoken to people who have. I’ve listened to their stories and one thing that often comes through is the belief that nothing will really change.

We need to stop burying our heads.

With rose-tinted specs, it’s easy to dismiss racism as a thing of the past. Former Harrow Borough manager David Howell has told of his experiences from his playing days. A physio, angered by the constant racism directed Howell’s way, hatched a plan for when the defender went down injured.

He’d run on, give the injury some treatment, get a banana out of his bag for Howell to take a bite and jump up as good as new. “It was our way of saying, ‘You can’t get to us,” Howell said.

These stories are supposed to be of the past. But it feels that in 20 or 30 years’ time, players of today will be telling similar stories of their experiences.

Even this season, Ebbsfleet United goalkeeper Nathan Ashmore, inset, has been in court to give evidence against a supporter at Eastleigh who racially abused him and, eventually, pleaded guilty.

In an interview with The Times this week, Ashmore said he expects to get some form of abuse every week.

It’s par for the course.

There is also a wider issue. Racism is deplorable and homophobic abuse will take just as long to stamp down on, but these aren’t problems confined to football. The game is reflecting society as a whole, where some people have been emboldened from the outcome of a vote about this country’s future relationship with the European Union.

Spend a few minutes on twitter and other social media platforms and you’ll see it everywhere.

Why should a player or manager have to put up with any sort of abuse? A manager recently put it to me about
the Respect campaign for referees. “What about the managers?” he asked.

Just because someone has paid to get in to watch a game of football, doesn’t mean the ticket comes with the right to hurl vitriol at someone.

While the bigger crowds at Step 1 and 2 will often mask a lot of what is being said, further down the Pyramid it is easily heard and seen.

Ashmore has said he shouldn’t have jumped the barrier at the end of their recent game against Boreham Wood to confront someone.

Perhaps the most surprising part of it is that, particularly in Non-League’s lower echelons, it doesn’t happen more often.

Every week players and fans are putting up with offensive shouts that go well past the go-to defence of ‘banter’.

If it was said in the local supermarket, you’d expect some sort of come back. But players and managers aren’t supposed to react. Instead they should take it and, should they dare to speak back, be ready to be called
out on that too.

There’s no easy answer. Non-League grounds are largely pleasant places to be, but we can’t pretend they are without their problems.

Often those who think they can get away with it do just that because clubs aren’t set up to deal with them always. It often requires a brave volunteer to address the situation.

As a collective we need to come together and call these people out. Racists, homophobes, anti-Semitics, the lot. Let’s clear them out of the game and society.