By Neal Harrington
He’s almost hit the landmark 1,000 appearances, but retirement is the last thing on the mind of sprightly striker Jamie Cureton.
The veteran hitman may be in his 44th year, but is determined to carry on playing long after he hits four figures some time in the next eight days.
The plan was for Cureton to celebrate the magic 1,000th game when turning out for Bishop’s Stortford in their Bostik League Premier division home match against Brightlingsea Regent on Easter Monday.
But with an injury crisis engulfing the Essex club, he may be forced to play his landmark game even earlier, away from the ProKit UK?Stadium, at Lewes, on Saturday.
Since making his top-flight debut in the Premiership with Norwich in 1994, Cureton has notched up 999 appearances and scored an impressive 358 goals along the way. 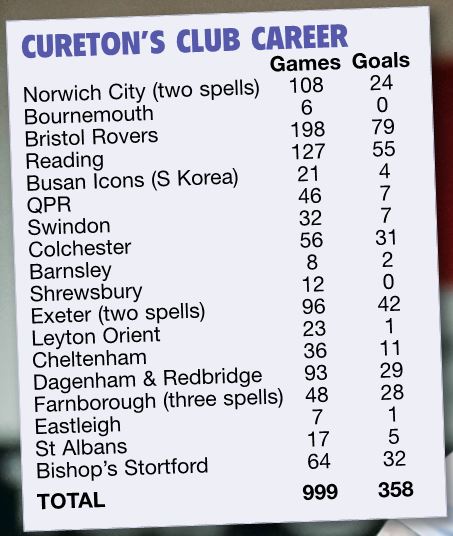 His value remains undiminished and as recently as March 23 this year, the Stortford joint manager bagged the winner in a 1-0 league success at AFC Hornchurch. So what keeps the former England U18s international going?
“I don’t want to stop as my love of the game is so great,”?he said. “That’s what drives me on. I still really enjoy being out there on a Saturday, scoring goals and winning football matches.
“As long as I can continue to do a job on the pitch, I will do it. I do everything possible recovery-wise to continue. I prepare my body as best I can for games.
“My diet is good, your body has to go with you. I’m playing at a very good level for my age. I’m still able to play at a high level, for 90 minutes, scoring goals. I’m not out there just to make the numbers up.”
Cureton, who works as an assistant coach with Arsenal U16s, stepped into management in September last year by taking over the reins at Stortford alongside club owner Steve Smith.
Goals have continued to flow with Cureton notching 19 in league and cup so far this season. And he also holds the proud record of scoring in all eight top tiers of English football, while leading the Championship goalscoring charts with Colchester United in 2006-07.
“By getting 20 plus goals in a season, I think I should carry on,” he added. “I am very much driven by targets. What can I get to? I’ve now scored over 350 goals, so I want to get to 400. It’s given me an insight taking over as joint manager with Steve Smith, like picking teams and giving team talks. I always see myself as going into management rather than coaching.”
Cureton made his bow for Norwich in 1994, scoring just 13 seconds after coming on as a substitute in a 3-0 Premier League home win over Chelsea.
“When I was at the top, I thought that was me for ever,” he went on. “I didn’t have the attitude I have now. I thought I knew it all, I didn’t adapt to what was needed. I felt my ability was enough. Going down the levels grounded me and I worked myself back up to the Championship. I was very much Jack the Lad.”
A quarter of a century later, Cureton’s immense enthusiasm for the game is still there.
“I want to play still, I’ll be here at Stortford playing and managing next season,” he said. “The buzz is still there.
“People say, ‘Are you not bored yet by things like the travelling?’ I actually enjoy the whole routine of it. I will be devastated to call it a day.”