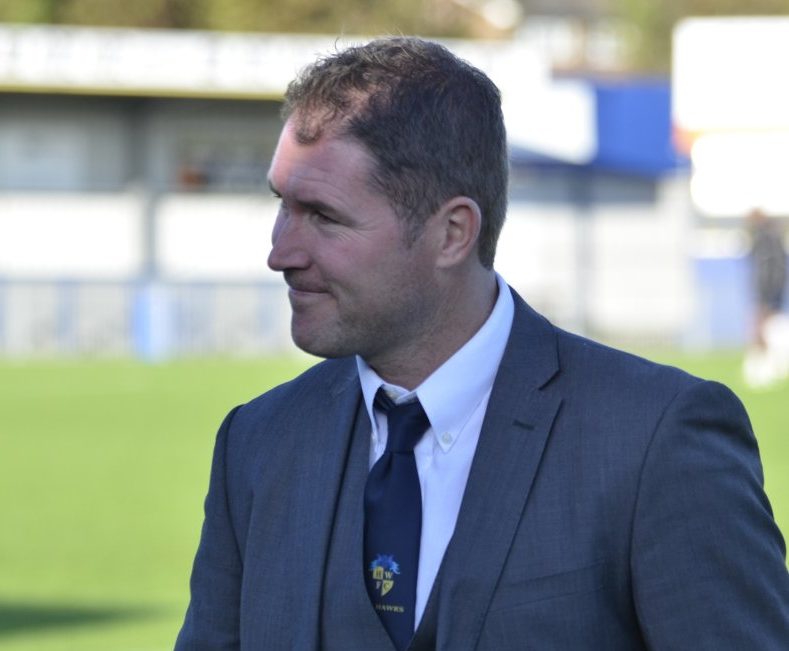 Lee Bradbury’s Havant & Waterlooville had just written the comeback chapter. Standing on Kingstonian’s pitch, where his Hawks had just won the 2016-17 Ryman Premier title to secure an immediate return to Step 2, the manager was conducting his post-match interview.

But what should have been a moment of title triumph was quickly stopped in its tracks.

“I had a sharp pain across my chest,” Bradbury, 43, says. “I drained and started shaking and hyperventilating.

“I had to get my physio, Phil Ashwell who is a great physio – he saved our chairman’s life – to look after me. It was an anxiety attack. I was in the dressing room, shaking and thinking I was having a heart attack.

“I’d been dealing with them throughout that year but that really then triggered me to go and get help.”

In a hotel just off the A3 near Guildford, Bradbury sits down to talk about the June 2015 tragedy he had bottled up but led to nightmares, panic attacks – his first hit a year earlier after they’d played St Albans City – and being diagnosed with Post Traumatic Stress Disorder.

He explains how he came through it by seeking help and why he now wants to raise awareness and money for the PFA’s mental health project by launching his own clothing range called Bridge.

The name signifies strong foundations, a good structure and how it gets you over something – in Bradbury’s case, the mental health problems in the aftermath of the death of close friend Ryan McKinlay.

“We were out on my friend’s boat in Osborne Bay, about 16 of us, it was a nice evening,” Bradbury says. “Then there was an accident. My friend was on a smaller boat and they went into the big boat. I was just coming back from getting changed downstairs and heard, and saw, part of the accident.

“He was face down in the water with a lifejacket on. I dived in and pulled him out. We didn’t know but he was dead at that time. We gave him CPR and called the air ambulance.

“I’d also jumped in the little boat because it was drifting off. It was a little Rib and with that I got pushed out into the shipping lane. It was filling with water, I was trying to pull some of the foam seats out to use as a lifejacket, big tankers were coming towards me, and I was waving for help.

“A yacht came up alongside and rescued me. With all that happening, the helicopter came and hoisted Ryan up to take him to hospital. On the way to hospital we found out he’d passed away.

“He was 36 at the time. I’m Godparent to his boy, he’s Godparent to my son and daughter so we were really close. It just made me realise how valuable life is and how quickly it can be taken away from you.

“Your best mate, a dad, a husband, a son – all those things to all these people and everyone’s lives have suddenly changed. It makes you feel vulnerable.

“I thought I was OK. Eight or nine months later I started to have nightmares and panic attacks when I was out – sweating, hyperventilating, feeling sick, feeling claustrophobic and just wanting to run and get away from everything.

“I’d be fine, then all of a sudden, bang, it would hit me. Scary, to be honest. It feels terrible when you go into an anxiety, panic attack.”

After four attacks, Bradbury was diagnosed with Post Traumatic Stress Disorder by his doctor and given medication.

“It even got to the point where I was worried to exercise too much. I collapsed with one of these panic attacks. I went into the hospital where they thought I was having a heart attack and gave me morphine. I collapsed in the major unit and woke up on oxygen with doctors and nurses around me.

“The League Managers Association were brilliant. They gave me a full medical up in London where you have your heart looked at and everything. I take statins because there’s a heart problem in the family and it got to the point I didn’t want to exercise because I was worried, with what I’d seen, how quickly life can be taken away from you.

“It was a strange scenario, one I’d never been in. I was in the Army for four-and-a-half years when I was younger then played football for 17 years so exercise was a big part of my life.”

Counselling sessions helped too and Bradbury hasn’t had a panic attack in the last 18 months, while he says Havant were very supportive.

“I had to go through a process to get to where I am now,” he says. “Some people think it might come out of you straightaway but mine was months later.

“It was dealing with the grief. I thought I had dealt with it. But where football is a masculine world, men in general don’t really talk too much and with the army background and a rough and tumble centre forward, you don’t really share much with people. Which is wrong – a problem shared is a problem halved, as they say, and that’s a great bit of advice. Because once I’d spoken to people about it – counsellors, friends, family – it was much easier to deal with.”

Bradbury now wants to give something back. The first part of the Bridge clothing brand launched this week with hats and he’s been calling in favours from ex-team-mates and managers.

“Our slogan is, ‘Just speak out’,” Bradbury says. “That’s a really big thing. Sharing and talking about it – it’s no good keeping it all inside. People from all walks of life can suffer.

“It’s that realisation that if you feel depressed, have anxiety or anything to do with mental health, then you’ve got to seek some advice.”

Bradbury says deciding to speak so publically now was an easy decision. A manager may seem untouchable to the outside world but he wants to show they’re not.

Bradbury left Cowes High School on a Friday two days before his 16th birthday. On Monday he signed up for the army.

He joined the Royal Hampshire Regiment, which then amalgamated with the Queen’s Regiment to become the Prince of Wales’ Regiment. Bradbury was in the First Battalion, a frontline rifleman, who toured Northern Ireland for two years.

Professional football was still a dream – he’d written to all 92 League clubs as a 15-year-old – and a trial at Portsmouth led to Terry Fenwick signing him and the army giving an honourable discharge.

“I had a very good four-and-a-half years in the army and I wouldn’t change it for the world,” Bradbury says. “Football was always the thing I wanted to do. If you’re good at sport in the services, they really look after you. I was all over Europe, Hong Kong, and lots of places playing football for the Combined Services.

“I went from earning £200-a-week around the streets of Northern Ireland and patrolling in the countryside, to earning much better money playing football. I couldn’t believe my luck! You do have to work hard for these things and I did have a good mentality.”

Within 18 months of leaving the army, in 1997, Manchester City broke their transfer fee and forked out £3million for his services before his career took him to Crystal Palace, back to Pompey, Walsall, Oxford United, Southend and AFC Bournemouth.

In 2011, he became the Cherries’ caretaker manager when Eddie Howe had left for Burnley and guided them into the League One play-offs where they were only beaten on penalties by Huddersfield Town.

He left in March 2012 and by October had his second job in senior management at Havant & Waterlooville.

It’s been a roller-coaster. Taking the Hawks close to promotion to Step 1 in 2015, they were relegated to Step 3 in 2016 before successive titles catapulted the south coast club to Non-League’s top table.

It was a remarkable return and despite their relegation, the way Bradbury’s side attacked the league will no doubt lead to plenty of suitors for the boss following his departure earlier this week.

Bradbury will continue trying to give back in memory of Ryan and urges people struggling with their mental health to speak up.

“I was waking up at night, sweating, having nightmares, re-living what happened,” he says. “It was strange really because I’ve never been one to share those emotions. I don’t find it natural to do that. You think you’re a manager and all that but everyone can be affected. That’s really the message I want to get out. If you are affected, speak to someone. You have to – just speak out.”

For more information visit www.bridgeclothing.co.uk or check them out on Instagram at OfficialBridgeClothing