Home / Features / Fraser Franks: How bouncing back in Non-League shaped my career

Fraser Franks: How bouncing back in Non-League shaped my career

Posted on 15th April 2020 by admin in Features, The Big Interview with 0 Comments 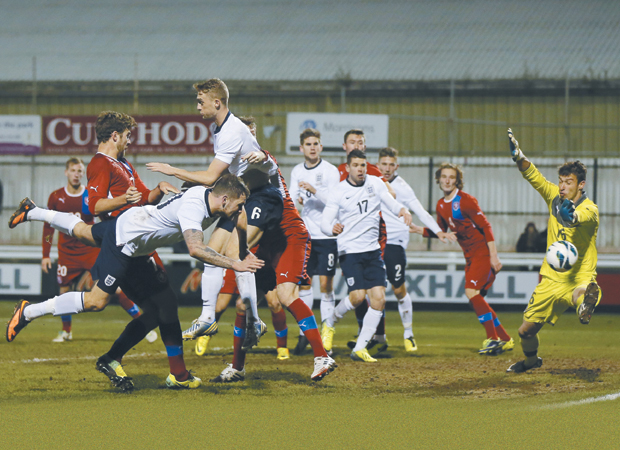 Franks Franks didn’t know it at the time but his goal that set Newport County on their way to a 4-1 win over Notts County last February would come in his last game of football.

Within ten days, the former AFC Wimbledon, Welling, Luton, Stevenage and England C defender would be told by doctors he had to retire aged just 28 because of a heart condition. He was devastated.

Franks had just captained Newport to a famous FA Cup third round win against Leicester. A rolled ankle in the next game kept him out but, despite being not fully fit, he managed to come on as a sub in the next round against Manchester City.

A few days later, against Notts, he felt awful all game and, with ten minutes to go, had to come off. The next day he kept feeling hot and cold, and took himself to bed. Then the chest pain started, palpitations and he struggled to catch his breath. Wife Stacey, seven months pregnant, took him straight to hospital.

An infection around the heart flared up and an issue with his aorta was diagnosed before being confirmed by two separate specialists. And that was that.

But anyone familiar with Franks’ career will know how he responds to set-backs. With his daughter Nellie soon to arrive in the world, he didn’t spend time feeling sorry for himself.

Now he’s scouting for Bristol City while studying a Sporting Directors degree at Salford University. Franks is also working for a company delivering mentoring and helping young players at Premier League and EFL clubs on the perils of social media and the mental side of the game.

“A lot of the talks I’m doing for the academies, I’m looking back to see what I have done,” Franks tells The NLP. “I’m proud that I was released by clubs and bounced back.”

Franks spent most of his childhood at Chelsea before joining Brentford. He was on the first team bench a lot but never really broke into the team.

Former Bees team-mate Nikki Bull, now Leatherhead manager, called in a favour from Terry Brown to get Franks a trial at AFC Wimbledon.

“Browny was old school but he was brilliant,” Franks says. “Proper blunt and honest. He said, ‘Look, I’ve got £300/week for a centre-back’. There were three or four of us on trial at the time and it came down to me and Ed Harris. They wanted to keep the trial on longer.

“We went back in and that was it; we signed. Ed is one of my best mates now. He was groomsman at my wedding – he’s at Dorking Wanderers. We just wanted to play football. Wimbledon is one of those clubs – until you go there you don’t realise the whole story, the fanbase – it was a brilliant time for me.”

Although he injured his ACL meaning he missed the run-in and the play-offs, Brown and his management team made him feel a part of everything. It culminated in promotion glory over Luton at Manchester City.

“It’s not until you look back but the clubs I’ve played for in the Football League, everyone is on win bonuses, clean sheet bonuses, appearance bonuses,” Franks says. “There was not one thing at Wimbledon. You didn’t get extra money if you played. It’s just not something I even thought of.

“But we got rewarded at the end of the season with a trip to Vegas when we won the play-offs, which was good! I was 19 at the time, under age in America, trying to get into clubs and casinos!”

Franks had achieved his aim of returning to the Football League. Looking back, he admits he was impatient to return and didn’t do himself justice in a loan spell at Hayes & Yeading. That summer he moved on. Clubs in the League and the Conference were interested but he kept hearing about his inexperience. As soon as he spoke to Jamie Day at Conference South Welling, he knew where he wanted to go – even for less money.

“It’s rare you could match the set of lads I had at Wimbledon but Welling was just as good,” he says. “You could tell from day one. A lot of Non-League players go for money – but people signed at Welling for the right reasons. That was to either go and win something or to use it as a platform to get back in the Football League.”

Franks dedicated himself totally. He trained alone in the local park and went to the gym in the day.

But he was playing every week in a Welling side that went on a 14-game winning streak that would eventually carry them to the title.

“It’s another proper family club. When I stopped playing I drove past there once, stopped my car and walked onto the terraces. I just sat there. I just absolutely loved it.”

That title-winning season led to Franks’ first England C call-up and a dream trip to Bermuda. Franks would go on to win five caps for Paul Fairclough’s Three Lions and also wear the captain’s armband.

“A lot of the stuff I’m doing now is on the mental and psychology side of football, and Paul Fairclough was unbelievable at that,” Franks says. “It’s something I’ve always taken with me and tried to get managers to do at other clubs.

“You feel like a band of brothers after it. ‘I want to go out and do well for him’.

“For an international camp, Paul brought everyone together so quickly. That Bermuda trip is the only squad I’ve ever been in with people like Sam Clucas and Antoni Sarcevic.

“But we still talk to this day regularly. Sam Clucas was playing in the Premier League and he sent my nephew a kit with his name on the back – we were only in the squad together once!”

Franks played for England at Woking against the Czech Republic a few months later and the offers came in straightaway. Forest Green activated his release clause but he would eventually sign for Luton and play his part in their Conference title triumph.

But it also led to another pivotal moment in his career that he still draws on now. A game against Braintree on TV where they were expected to take the crown, only to fall to defeat.

“It’s the worst game I ever had,” Franks says. “I was a nervous wreck. I started off badly. I was marking Dean Wells at a corner and he scored after about two minutes. I crumbled.

“I had my whole family there. I literally walked past them and got straight in my car and went home. I lived in a flat around Luton on my own. I remember crying my eyes out.

“I look back – we were top of the league, had literally won ten out of the 11 games I’d played for them, the pressure got to me and I felt horrendous. I remember going on social media and I was getting battered by fans.

“Within the space of a week we’d won the league and I was on cloud nine but I learnt a lot for going forward. I wrote stuff down on my notes on my phone after that Braintree game. I’ve still got them now. I didn’t have my wife or my young family then so my life was 100 per cent football. If I had a bad game, I took it home.”

Franks uses that as an example when he speaks to academy players. He highlights the ills of social media and explains how his wife’s lack of interest in football helped him put poor performances into perspective.

After Luton, Franks established himself as a Football League player with Stevenage and then Newport, and enjoyed those big FA Cup days.

“The off-field stuff was just as important to me,” he says. “My nephew Frankie was one when we won promotion at Welling. He was on the pitch with me then and at Luton when we won the Conference. He’d seen me in Non-League and then I was able to walk out with him as mascot for Leicester.

“After the Man City game, he was in the changing rooms with Sterling and Guardiola. I’ve been lucky to give him some good little memories. That probably meant more to me than the actual game.”

It means even more now he’s retired and become a father himself. Franks is looking forward, too.

“I don’t want to be that old footballer for the rest of my life,” he added. “I want to go and establish myself in something else now and have an impact.

“Hopefully that is going to be back in football, helping players. I love the recruitment side, but I want to have relationships with players.

“That Braintree game is a big one for me – if I can help someone in that kind of situation, or give advice to someone who is is maybe scared of dropping into Non-League and aren’t sure if they can bounce back.”