By Matt Badcock
JON PARKIN’S nine-year-old son, Oliver, wants to know when he can read his dad’s autobiography.“I told him on the day of my funeral,” Parkin laughs.
Feed The Beast, which promises Pints, pies, poles – and a belly full of goals, is the story of the York City striker’s colourful career.
One that started out at Barnsley, nearly saw him quit the game to become a nursery nurse, before taking his burly frame – hence the affectionate Beast nickname – from Macclesfield to Hull City, Stoke City, Preston North End, Cardiff City, Fleetwood, Forest Green, Newport County and back to the Minstermen, where he’d fallen back in love with the game all those years ago.
“There’s a story in there from pretty much every club I’ve left and the reason why,” the 36-year-old says. “They’re not all just because the manager didn’t want us or I wanted to leave – there’s always been some sort of argument or story of how I’ve actually left. If people are reading it from clubs I’ve played for and they’re wondering why or why they didn’t keep me, hopefully it will be interesting.
“I’m not embarrassed about anything I’ve done really. Maybe a couple of things but it’s probably a book people will read and say, ‘How has he played football for 20 years?’”
Loved by fans he’s played for, Parkin could be considered a dying breed in a game being drained of its characters.
His goal record more than stands up. He’s scored 225 times, famously including a hat-trick at Elland Road for Preston in a 6-4 thrilling win, and played more than 600 games, winning promotion with Stoke City and Fleetwood, played and Wembley three times where he also scored and won the FA Trophy with York. But just how has he lasted all this time?
“I’ve no idea! Luck?” he says. “I must have been alright at it I suppose. I think my size has actually helped the way I play and I’ve been lucky most managers have thought, ‘He’s a good player, we’ll sign him and we’ll get him fit’. They’ve all tried to change me but within a month of getting to know us they’re like, there’s no point, we’re just pickling in the wind.
“It’s usually when someone has been sacked and they’ve fetched a new manager in. Luckily for me I’ve always been scoring quite regularly so I’ve always had that little bit in the back of my head where if a manager says, ‘You need to do X Y and Z,’ I can say, ‘Well, I scored Saturday!’ Or ‘I’ve scored ten in 20 games’. So shove it, kind of thing!”
Determined to be as honest as possible in his book, Parkin says he hasn’t been afraid to dig out some of his past managers. 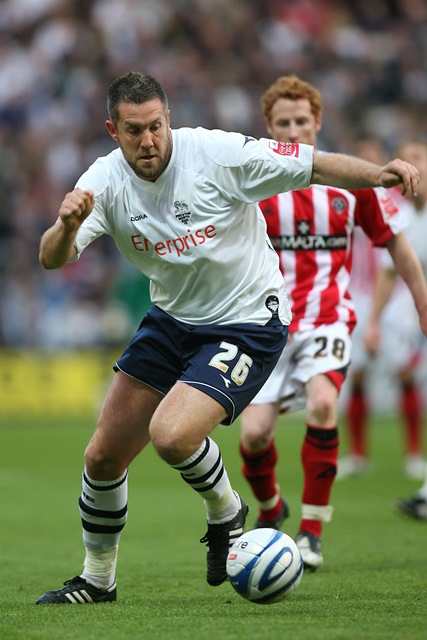 He says there are stories in there even his family didn’t know about until now. Like the tough time he went through at Cardiff and how he almost walked away from the game when he was let go by Barnsley.
“I started a college course as a nursery nurse when I was 19,” he says. “I was very close to sacking football off when I was released by Barnsley.
“It wasn’t the fact I’d been released it was the way it happened. I thought, ‘It’s not for me this’. I’d got shipped out on loan to Hartlepool and played like five minutes in my first month. The manager at Barnsley rang and said they wanted me to stay another month.
“I was supposed to be training one Saturday morning which meant I wasn’t in the squad for the Saturday afternoon. I’d gone home on the Friday and I didn’t get the phone call from the physio until tea time. I wasn’t driving at the time so I said, ‘Well, I can’t get up.’ He said, ‘No bother, that’s fine’, so I thought, well, I’m not travelling up to watch the game in the middle of January freezing my t**s off and I didn’t go.
“I got a phone call on Monday morning from the manager at Barnsley saying, ‘Who do you think you are? You should have been on the bench’. But I shouldn’t have been because I was supposed to be training in the morning.
“He ended up swearing down the phone, told me I was fined two weeks wages and I was free at the end of the year – you can eff off and that was the end of that.
“That was Steve Parkin. Then he ended up coming to Hull as assistant manager when I was there.
“Phil Brown pulled me first day and said he’d fetched in Steve Parkin, what did I think? I told him exactly what I thought – that was the start of me wilting away at Hull.”
Parkin is great entertainment as he talks through his scrapes.
“I’ve never got in real trouble – I’ve just always seemed to have got myself in pickles where, if I’d thought about it, I wouldn’t have got into them,” he says.
There was the time he almost drowned white-water rafting while on pre-season in Austria with Fleetwood and a story about having pre-match fish & chips when he didn’t realise he was due to be on the bench.
Parkin admits he’s always seen football as a job. Something he switches off from when he leaves the training ground or stadium after a game. He tends to enjoy himself too, often at the centre of dressing room pranks – just ask Chris Sedgwick when he was at Preston.
“Transfer deadline day, obviously everyone’s waiting around their phones,” Parkin says. “Sedgey’s gone out to train but I’ve waited back. I changed my number in his phone to his agent’s name. I phoned it 15 or 16 times and sent a message saying: Call me ASAP. Something’s happening.
“He’s come in from training, looked at his phone straightaway – we’re all watching – and he smiled to himself. He got up all cocky, ‘Looks like I’m off lads’. He’s gone out of the dressing room into the car park and phoned this number, which he thought was his agent, and I answered: ‘Get back in here you idiot!’ He came back in with his tail between his legs. If you think about it, it’s actually quite cruel. He took it well.”
Parkin has been around long enough to see how the game has changed over the years.
“It’s got a bit too serious now,” he says. “Everybody’s trying to find new ways to get that little bit extra. I say most days, ‘I’ll tell you what, I don’t know how Pele used to play, me. I don’t know how Georgie Best used to play. Not doing all this activation, not doing all this strength work – how did they play football, these guys?’
“It’s obviously all changing for the better as a footballer but, I don’t know, it’s just all got a bit serious. I want to go into work, enjoy myself – and entertain the lads.”
Parkin eventually wants a crack at management when his playing days come to an end.
He’s also part of a growing podcast called Under the Cosh with former Preston team-mate Chris Brown and an award-winning comedian also called Chris Brown.
For now, while the body lets him, he’ll keep trying to knock in the goals at York as they eye promotion from the National League North.
Any regrets?
“I’ve been doing quite a few interviews for the book and people say, ‘Do you think you could have played higher?’” he says.
“I don’t know if I was good enough for the Premier League, I don’t know if I was quick enough. I do feel if I lived my life properly I could have stayed higher for longer. But the overriding factor of it all is, I’ve had a bloody good time. I’ve right enjoyed it. Is that worth more than 50 Premier League appearances? I think it is.”

Feed The Beast is available in Waterstones, WH Smith, Amazon and all good book shops. It can also be downloaded on Apple and Kindle.