PAUL FAIRCLOUGH says England C have got the weapons in their armoury to hurt Czech Republic Under-21s at Woking this evening.

The friendly – that is free to get in to – promises to pose Non-League’s Three Lions a stern test.

Chelsea keeper Petr Cech is expected at Kingfield to watch his country’s next generation including Chelsea defender Tomas Kalas.

Fairclough has had to shuffle his own pack too with Alfreton duo Bradley Wood and Dan Bradley pulling out on Saturday with injuries.

Luton Town midfielder Andy Parry earns a first call-up while James Norwood – who lit up the stage with a hat-trick on his C debut in Bermuda – returns.

FC Halifax Town’s exciting attacking talent Dan Gardener met up with the squad but fell ill on Sunday night and was sent home after being assessed by the medical staff.

The England boss got the c 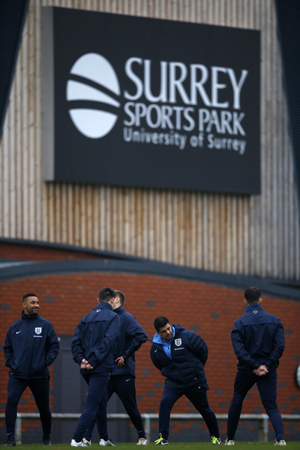 hance to see their opponents in the flesh last week.

And he was left in no doubt of their quality after seeing Cyprus Under-21s disposed of 4-0 in an impressive performance.

“They are very, very competent. Someone from Monaco is coming to check them out. The lad from Chelsea looked very composed. He’s very quick and comfortable on the ball – a lot of them are like that.

“They are very tall at the back and they’ve got a tall lad up front, the keeper is a monster and they play. They’re not like some European sides who like to drop off; they like to press so it’s going to be interesting.”

It’s the first time England have played on home soil since February when they were narrowly beaten 1-0 by an outstanding Turkey B side.

That’s been followed by a 6-1 win in Bermuda and a 1-0 defeat to Latvia. Preparations for the next ICT tournament are now ramping up and Fairclough wants his players to show why they should be involved when it kicks off in Slovakia next May.

“When we played Turkey in the ICT semi-final there was an element of caution about our game which worked until the moment it broke down when we had a player off the pitch,” he said.

“We had a strategy where we went with one up front. But having seen this side we’re going to match up.

“They go with two in the middle of the park and I think I’ve got the right players to match up with them.

“Matty Pearson likes to get into people – they’ve got a playmaker and I’ll want Pearson right in his face.

“Cyprus played with one up front and didn’t really pressurise the Republic back four so I want to really press them there.

“But we’ve got flair and pace in the right places. You look at the pace we’ve got in the side – it is quite scary. Keanu Marsh-Brown, Andre Gray, Joe Lolley, Elliott Frear, James Norwood. There is some pace there.

“When we go abroad I certainly guarantee everyone 45 minutes. Well, that isn’t going to the case this time around.

“We’ve used the last two games to do that in Bermuda and Latvia but now we’re looking ahead. I will endeavour to get them all on at some stage but I’m not going to make wholesale changes.

“We want to put on a good show for the public. I’m not throwing caution to the wind but we’re going to be more attacking than we have for a while.

“This is another opportunity for them to go and match themselves against top, top players.”