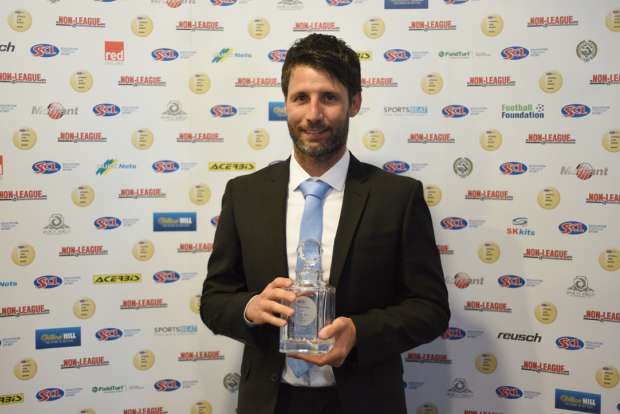 IT may say Danny Cowley on the decanter, but for the former Braintree Town boss it was a joint award along with his brother Nicky.

After a morning teaching at the FitzWimarc School they will soon leave for a crack at full-time management with Lincoln City, the Cowley brothers dashed to Stamford Bridge.

In his acceptance speech Danny praised and thanked the efforts of everyone at part-time Braintree who helped their incredible third-place finish in the National League, before the duo had a chat with The NLP about the latest high on their journey that started at Step 5 nine years ago.

“For us it’s a joint award,” Danny says. “It will go on mum’s mantelpiece no doubt. Our strength has always been our unity and the fact we’re both pretty relentless and 24/7 means we can get double the amount done.”

Relentless is a good word to describe two of the most driven people you could meet in Non-League football. Working in the same PE department – along with Danny’s wife Kate – they are in each other’s pockets and have plenty of time to indulge their passion.

“We do talk about it quite a lot – we’re pretty obsessed with football,” Danny says. “When we go with our wives for dinner, we text each other some other topics we can talk about to try and give them a break!

“We’ve got a real strong family background. Mum and dad have always instilled really good values into us and we carry that family ethos into our clubs.

“We look after one another. We all know what a football season is like and the trials and tribulations, it’s a rollercoaster ride, so we’ve got to be together and that’s always held us in good stead.”

Nicky adds: “It’s important to work hard together. I’d like to think the success we’ve had is because we’ve been a good team. There’s been opportunities for us both to go in different directions at times, but we’ve felt we could achieve more collectively and working hard together.

“We both buy into the team ethic and that’s not only for our players on the pitch but for us off it. If the players see us working hard as a team then they’re more likely to do it themselves.”

Like all siblings they are also both incredibly competitive and growing up liked nothing more than beating the other.

“Nicky once threw a snooker ball at my head after I beat him when he was about seven or eight,” Danny, 37, laughs. “It went straight through the fish tank and flooded my mum’s brand new carpet.”

Nicky continues: “We ruined the front garden and dad’s lawn that he absolutely loved by playing football head tennis over the wall constantly and cricket against the garage. We’ve always enjoyed playing against each other and we love all sports.”

They also love winning and that’s something they’ve become used to. A knee injury forced Danny to retire when he was 29 and he soon stepped into management with Concord Rangers.

Then in the Essex Senior League, the unknown Beachboys rose up the Pyramid to reach the National League South.

Before he joined his brother in the dug-out, Nicky was his captain on the pitch. And the younger brother by three years goes back to the win at Barkingside in 2008 that sealed the title as one of their biggest results.

“You said that’s the only game of football you’ve ever played in and been nervous,” Danny says to Nicky. He replies: “There were three teams who could win the league that day and it was a pivotal moment in our journey really.

“We managed to win 1-0 in a very close game. That was the springboard really for our success at Concord.”

Danny adds: “I had to talk him into joining. I retired at 29 so I still had quite a lot of friends playing that were in and around that age. I pulled in a few favours to get a strong squad and we did well in the Vase that year too.

“Nicky got 27 goals from midfield that season – he did really well. So well that I cut his money the next year! He always laughs because as a player he went from Step 5 to Step 2 and he was on more money at Step 5 than he was by the time he got to Step 2!”

Defeat to Grimsby Town in the play-off semi-finals was to end their season before the prospect of full-time management lured them to Lincoln.

Now they will have one job to focus on. It’s a scary thought for a pair who, as described by Braintree chairman Lee Harding, seem to have more than 24 hours in their day.

Danny says: “We get in from football on a Tuesday and Thursday evening about midnight. I drop him off – because I always drive – and then we phone each other straightaway. Our wives get the hump with that. We’re finishing off our conversations. It’s what we are, it’s what we do. We want to be successful.

“The foundation to any successful person is always hard work. It’s got us this far, it’s given us a wonderful opportunity and one we will work hard to make the most of.”