National Game Awards in association with SCL – Corby cheers for the beers!

Posted on 24th May 2017 by admin in #NonLeagueChallenge, National Game Awards with 0 Comments 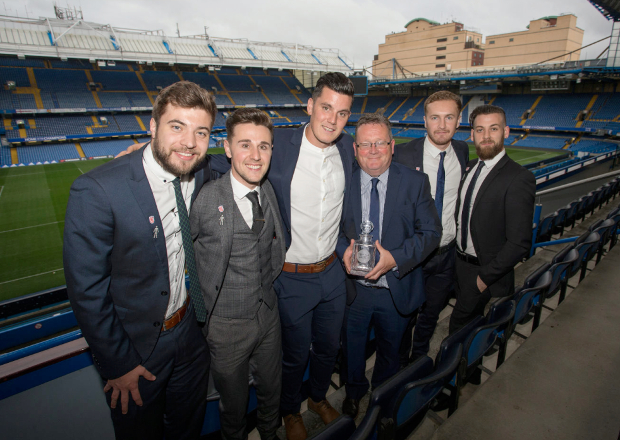 WHEN that ball hits the back of the net, it’s not uncommon to see somersaults, backflips and what must surely be rehearsed routines in jubilation. But the Marathonbet goal celebration of the year was a pure spur of the moment reaction.

When Corby Town went ahead against Mickleover Sports through Ben Milnes’ goal, teammate Jason Lee decided to celebrate by taking a sip from an unattended pint of cider on a wall – a moment that was captured on camera.

Since then local, national and international media have basked in his limelight, with the intermittent months still something of a blur since the February thirst-quencher.

“It’s a privilege to win – I never even realised these types of awards existed so it’s exciting to have something like this,” said Lee, whose sup earned Corby a whopping £10,000 from award sponsors Marathonbet.

“A couple of hours after it happened I got a notification on social media and saw a picture and started noticing the views going up and up.

“All of a sudden my phone kept ringing and I was getting calls from America, Australia and it was brilliant. I don’t know why I did it – the fans were going wild and the beer was being spilt, so I wanted to make sure it didn’t go to waste!

“I spoke to a few of the lads after, so all I can say for the next celebration is watch this space!”