The Non-League Football Paper
Home / Features / The Big Interview / Fleetwood Could Be Writing Headlines, Not Just Making Them

Fleetwood Could Be Writing Headlines, Not Just Making Them 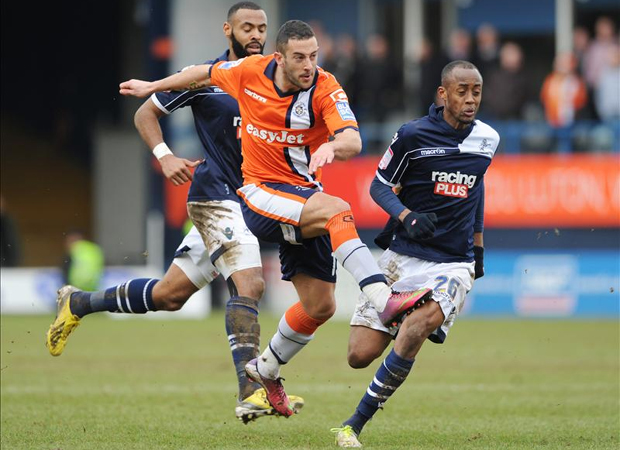 IT WAS in January that Stuart Fleetwood got in touch with this reporter to enquire about courses, qualifications and ways into sports journalism.

Having been told he could leave Luton Town, the man who’s been making Non-League headlines since bursting onto the scene by winning promotion with Hereford in 2005-06, then following it up with 36 goals in a Golden Boot-winning season for Forest Green, was starting to consider writing them.

It is an option the former Wales Under-21 striker – who has regularly written blogs on his playing experiences – says is still under consideration as he embarks on, for the first time in his career at 27, a season of part-time football.

But after signing for big-spending Conference South title favourites Eastleigh this week, Fleetwood – who left Rovers for Charlton in an eye-catching £150,000 move back in 2007 – is still likely to making the news rather than reporting it, such is the expectation on the Spitfires.

He likens the move to when he left then-League Two Hereford United for the Hatters in August 2011, although this time, apart from a two-year deal in the Scottish Premier League that would have taken him too far away from his young daughter in Hereford, there wasn’t much else on the table.

“I went away with Burton Albion for six days to Spain and was hopeful of getting something there, but nothing materialised,” says Fleetwood. “I played in a game for Alfreton against Walsall on Tuesday and I had the offer from Scotland.

“The Scotland one was a massive opportunity. But some things are more important in life and at the minute, my girlfriend and I have moved back in with my mum in Gloucester while we look for somewhere that leaves me 40-odd minutes away from my girl.

“I’d listened to four or five clubs showing an interest, but no-one put in a firm offer down here. I’d been waiting for the phone to ring for a while, having left Luton in early April, but interest doesn’t pay the bills.

“Eastleigh got in touch and knowing the standard of player already here, like Craig McAllister and Chris Todd – both of whom I spoke to personally – I was excited by it.”

Maybe so, but even at the expense of dropping below the Conference Premier for the first time in a career that has also taken in Exeter City, then in Leagues One and Two, since kicking off at Cardiff City 11 years ago?

“It’s something I had to think about,” he replies, “but going part-time is something I would have had to have thought about in my career eventually, so why not now?

“Although it is dropping a division, this is probably the only club I would have gone to at this level, because of the standard of the players here and what they are trying to do. If we do go up, I think we’ll go full-time straight away.

“They are trying to do everything properly by training during the day and it’s exactly the sort of situation when I left Hereford and dropped out of League football to go into the Conference with Luton.

“Everybody said, ‘Why are you dropping out of League football?’ But it was to go to a club like Luton, that has aspirations of going back up. This is no different.

“I think I can go down there and add a lot of experience – hopefully a few goals – and the aim is to go straight back up this season.”

The plan to go back up to the elite 92 did not work out at Kenilworth Road. Fleetwood netted 27 goals in 52 starts – better than one every other game – but Wembley play-off final defeat to York and last season’s miserable campaign left a sense of underachievement.

“It was obviously disappointing because my main aspiration in going there was to come straight back up, helping Luton back into the Football League,” he said.

“I came pretty close in my first season and then the second season just sort of fell away. I think it is going to be so different there this year.

“I was there towards the end of last season when John Still came in, and there is going to be a huge change. It’s their fifth season in the Conference, and the fans have got to start accepting that they are a Conference club at the moment.

“They seem to be favourites every year and that adds more pressure. I know they are a big club but their recent past is four years in the Conference, and the sooner they understand they are a Conference club and try to move forward as one, they will succeed.

“I think John is going to do that. I left on great terms with him and Gary Sweet, the MD. John’s brought in a lot of younger lads, shipped out a lot of the lads who were maybe on big money, and there is just going to be massive change. They have got to get used to that.

“I think it might take them a couple of more seasons to get out but John needs to be given that time. I was there for less than two years and played under three managers. It needs a bit of consistency.”

That is something Eastleigh found in the second half of last season under Richard Hill, after being second-from-bottom in January.

They went on a ten-game unbeaten run to make the play-offs, eventually losing at the semi-final stage to Dover, and have since added the experienced Yemi Odubade, Jamie Collins, Will Evans and Ben Strevens to the likes of McAllister, Todd, Dean Beckwith, Glen Southam and Jai Reason, who were already at the Silverlake Stadium.

“I’ve gone part-time probably a little earlier than I would’ve liked,” admits Fleetwood. “But sometimes you’ve just got to take what’s in front of you.

“I’ve had a lot of tweets saying ‘You should be playing a lot higher’. But we can’t choose our club, can we? I’ve taken this opportunity, it’s a one-year deal and I’m hoping to be in part-time football for one year – that’s it.

“It helps me out in the long run as well, because I can start thinking about the future. In full-time football you are riding the wave, training every day and enjoying life. You haven’t really got a care in the world. But now this is a little bit of a wake-up call, and it gives me a chance to get some future plans laid down.

“At Luton I averaged better than my career ratio of a goal every three starts and I know that if I play games, I’m going to score.

“There is no added pressure in my mind about dropping down a level and being one of the so-called big names at this level, because there are players of my calibre and even higher at Eastleigh.

“I’m 27 now and I’ve played over 300 games, so I’m bringing a lot of experience to the vast amount already in the squad.

“I know full well that going out and spending a lot of money on big players doesn’t guarantee promotion – just like it didn’t for Luton. But I think with the quality of our squad at this level, we’ll be rightly favourites to go up. I’m certainly here to achieve that goal.”