Home / Features / The Big Interview / I’d Retired But Now I’m In No Rush To Hang My Boots Up!

I’d Retired But Now I’m In No Rush To Hang My Boots Up! 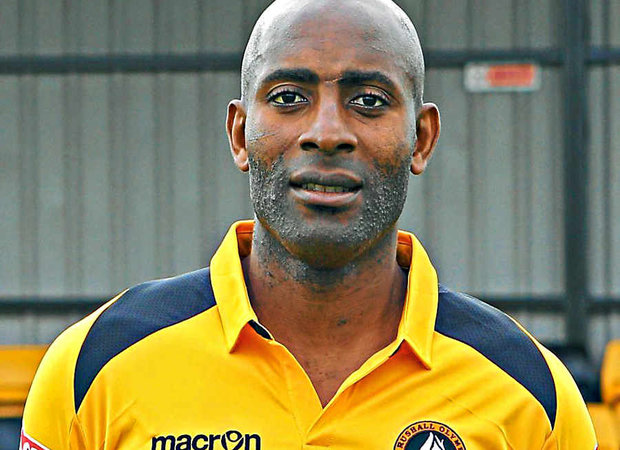 FOUR months ago, Dele Adebola came on for the last few minutes of Wrexham’s Conference Premier promotion final defeat at Wembley, safe in the knowledge that it would be his last time stepping out on a football pitch.

Spending your final few minutes on the turf at England’s home of football isn’t a bad way to end your career most would say. Yet if you look at yesterday’s Evo-Stik NPL Premier results, you’ll see the same Dele Adebola led the line for Rushall Olympic at Trafford.

The football bug has claimed another victim. With a coaching job doing work on the development squad at his former club Birmingham City, it’s not as if Adebola was heading for the football scrapheap.

But that buzz of a match on Saturday afternoon was something the 38-year-old was going to miss – that was until he was handed a lifeline by Pics boss Neil Kitching.

“I was focusing on getting my coaching badges in the summer but went and played a pre-season game for Alvechurch,” Adebola said.

“My intention was to retire, I wasn’t going to play again. Neil at Rushall managed to get my number and asked if I wanted to go and play a couple of friendlies for them.

“It’s not too far from where I live in Solihull so I went down there and enjoyed it. It suits me down to the ground and I didn’t need too much persuading to play on!

“I’m coaching most days at Birmingham City so full-time football was out of the question but at Rushall I get the best of both worlds.

“I thought I didn’t want to play but as soon as the season kicks off you get that adrenaline rush and just want to be out there on the pitch.”

Adebola spent the last few months of last season with Wrexham on loan from League Two Rochdale. With his coaching taking more of a prominent role, travelling from his Midlands home started to take the fun out of the game.

He said: “There’s so much more free time at this level of football which I can spend with my family and of course on my coaching.

“My Level 2 is almost done and then I’ll hopefully have my UEFA B License. During my time playing, I just didn’t have the time to do it.

“The biggest problem last year was that I was fed up of the travelling. I was at Rochdale and it was a five hour round trip every day for training.

“It became too difficult in the end and I asked to leave. I was supposed to go to Kidderminster on loan but instead went to Wrexham. I thought the travelling would be better but it wasn’t.

“It was all about enjoying football again. I just love playing and if it had come down to me having to play parks football on a Sunday, I would have.” 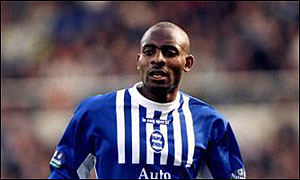 Adebola during his time with Birmingham City, who signed him for £1m

After starting out at Crewe under the infamous Dario Gradi, he went on to have significant spells with Birmingham – convincing Trevor Francis to part with £1m in 1998 – Coventry City, Bristol City and Nottingham Forest.

Often seen by fans and pundits as a gentle giant, have Step 3 centre-backs been testing his resolve?

“Not yet!” he laughed. “Most people have been quite respectful so far but I’m sure things will change when the weather gets a bit harsher and the pitches are worse!

“The biggest change I’ve noticed is that when you’re a pro, you don’t have to take anything with you to games. Your boots and kit is laid out for in the dressing room but it’s a bit different in Non-League!”

Born in Nigeria but brought up in Liverpool, Adebola played up front with Robbie Fowler as a schoolboy and then had the chance to sign for the Reds in 1992 with one of the Kop’s favourite sons.

“It wasn’t tough to turn down Liverpool, as strange as that sounds,” he added. “I wanted to make a career out of football and the competition for places even back then was very fierce

“If I hadn’t opted for first team football at 17-years-old with Crewe, who knows what would have happened? I have a lot to thank Crewe and Dario Gradi for.

“There are times when you look back and think ‘what if?’ but I have no regrets. I’ve had a very good career which I appreciate even more now and it’s not finished just yet!”