Posted on 28th September 2017 by admin in Columnists, Featured, Features, Latest News, Step 5 and below with 0 Comments

FOOTBALL clubs aren’t a patient bunch. Few invest time on the first team pitch and on the training ground in order to improve young players, while pressure to produce results quickly usually means managers don’t have the time – or perhaps the nerve – to do this even if they have the skills and resources to hand.

But when you’ve developed an established England player and sent a growing list of other promising players into the professional game, patience is something you know all about.

Stocksbridge Park Steels’ name is now synonymous with Jamie Vardy and the club has probably never been as well recognised as it is today. In Chris Hilton, they possess a manager who is driving the club forward, continuing to develop young players and in doing so, has the club aiming for promotion and progression for the first time in many years.

Did you always think you’d end up managing and coaching?

Yes – I had a long time at Frickley and played under seven or eight managers there. As a player who captained the club I was asked more than once to be caretaker in between appointments and it felt like a natural role for me to take.

How did you get into coaching?

I finished up at Worsborough Bridge after Mick Norbury asked me to go help out there with some coaching, and when he left during pre-season, I got the job by default really, though it was initially as joint manager with Ian Shirt. We had nothing – but I learnt an awful lot. We got a sponsor to cover training, got a bunch of local lads together and built a team that improved every year. I did three seasons there and was planning to take some time out after that because I never got a break when I finished playing! Then Stocksbridge got in touch and asked me to come for an interview and the rest is history!

Which managers stand out from your playing career?

I started under Billy Whitehurst at Frickley – a tough start for a young kid! He was the same in training sessions as he was in a game so you toughened up quickly and if you didn’t go for a pint after with the lads, you were dropped!

Stocksbridge might be well known these days but you’re still not able to compete financially with the top clubs in your league – how do you deal with that?

When I got here I had three players – and those three were all gone within a month of the season starting. It was tough but because I knew players locally the club knew I could operate within a limited budget. The important thing was that the club gave me time. We’d just been relegated and in that first year we finished 17th – so it didn’t look great but they recognised I was slowly building a side and stuck with me. 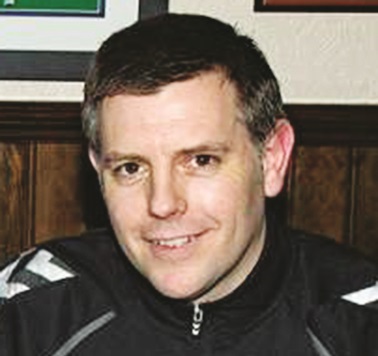 It’s clear you get the ball down and play – are you ever tempted to compromise that?

We talk about it and I’d be lying if I said I haven’t been tempted but we believe in our way of playing. It suits the players and the set up here. But it doesn’t mean we don’t understand direct play. The way we play allows us to develop players and we’ve improved every season I’ve been here so I’m not going to change now!

What sort of players do you look to bring to the club?

We need players who want to improve, are hungry to learn and can take on board what we want. I’d like to be able to bring in a bit of experience sometimes, but any player who comes here needs to work our way.

What’s your communication style – on the sideline/in the dressing room?

You can’t shout and bawl all the time because players just switch off, but there will be times when I need to take a leaf out of my old managers’ books and things need saying.

I never criticise for the sake of it, am always looking to make it constructive and what I get across from the sideline depends on the situation. If something needs changing or tweaking I do it but some games there is no need to talk.

And how about your relationship with the club?

They stuck by me and gave me time when they could have got rid – they recognise that stability and patience has brought rewards. We agreed a three-year plan and I’m delivering improvements year on year. This year we want play-offs and promotion.

You talk a lot about your staff and their role, you obviously value them…

We are a very close-knit group. We have a chat group that is always on the go. We work well together and we all have important roles in improving results on the pitch.

And so to the future – what are your ambitions?

Firstly it is to get Stocksbridge promoted. Beyond that, who knows? I’m ambitious and I would back myself to step up a level or two and do well, but it’s got to be the right challenge and as it stands, I’m very happy here.

*This article originally featured in The @NonLeaguePaper, which is available every Sunday.