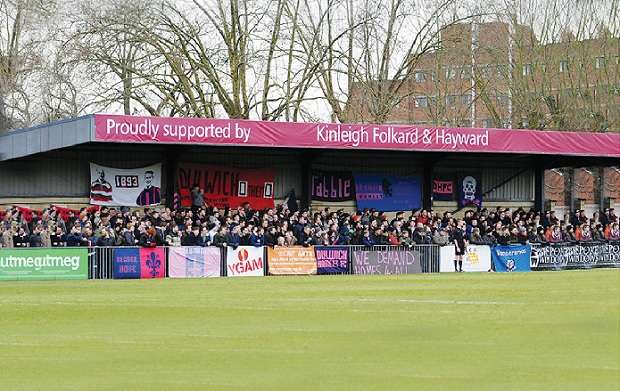 There are a handful of games in the Bostik Premier tonight, with all four fixtures having the potential to seriously effect both ends of the division.

With Hendon and Billericay not in action, Dulwich Hamlet can move clear at the top if they beat mid-table Merstham at Moatside tonight.

Hamlet are fresh from a 3-2 thriller on Saturday, after they edged past Burgess Hill Town, and will be hoping to build on that vital victory tonight.

In a end-to-end game at the weekend, Burgess Hill twice hauled themselves level, but Michael Chambers netted with just five minutes remaining to make sure Gavin Rose’s side kept pace with the leaders Hendon.

Fellow promotion chasers Leiston are also on the road tonight, and could close the gap on the automatic spots with a win at Enfield Town – a side who have their own worries at the other end of the table.

Three points for the Blues would take them above Glenn Tamplin’s side and into third, but confidence could be low following Saturday’s heavy 5-1 defeat at home to Folkestone Invicta.

Lowly Enfield, in 18th, will want to pull away from the pack of teams stuck on 12 points at the bottom of the league, and can take heart from the way in which Folkestone dismantled Glenn Driver’s side.

Metropolitan Police could blow the play-off race wide open with a win at home to Burgess Hill, after their 3-1 win against Thurrock reignited their push for National League South football.

Quickfire goals from Gavin James and Lloyd Macklin, before James notched his second of the game just after half-time, secured a comfortable win, and three points tonight would live Met into fifth.

However, at Dulwich, Burgess Hill showed they are hard to beat. Gary Elphick is in good form in the Hillians defence, and could play a pivotal role against a side who have scored three or more goals in four of their last five games.

The final fixture of the night sees second-bottom Tooting & Mitcham host Folkestone Invicta, with both sides hoping to build on encouraging weekend wins.

Folkestone thrashed Leiston away from home thanks to a scintillating first-half performance, while Tooting & Mitcham put more breathing space between themselves and bottom club Worthing with a win at Tonbridge Angels.

With Worthing yet to win, teams at the bottom like the Terrors haven’t been punished for their poor form, but three points could lift them up to 19th in the table and help them start to build some real momentum.