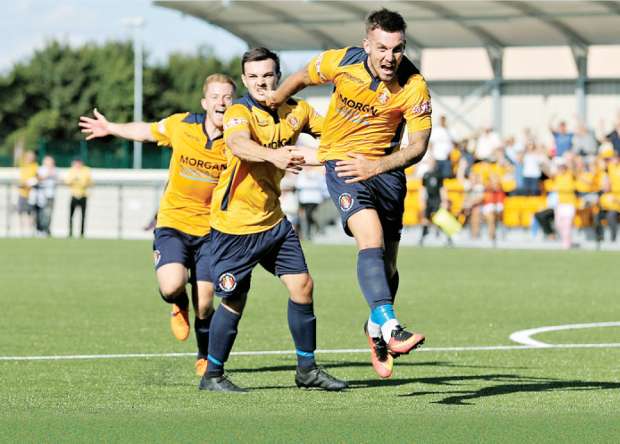 SLOUGH TOWN may be gearing up for next week’s big FA Cup date with Rochdale, but first they’ve got an FA Trophy replay with Hendon.

The magic of the cup is on the backburner for the EVO-STIK Southern Premier side this evening when they welcome the Bostik Premier outfit.

Kezie Ibe’s stoppage-time equaliser for Hendon secured a replay at the end of Saturday’s 1-1 draw. The winners will take on Bath City or Margate.

The match is one of six Trophy replays with a place in the first round proper at stake. National League North duo Kidderminster Harriers and Boston United face off for a second time. Kiddy were pegged back by two goals in the final 12 minutes to finish 2-2 at the first attempt.

The winners will be at home to current holders York City in the next round.

Bognor Regis Town and Hemel Hempstead Town go again after their 1-1 draw on Saturday while Step 4 Glossop North End make the trip to Workington AFC. The pair drew 0-0 at the weekend. A plum home draw with Hartlepool United awaits the victorious club.

The replay action continues tomorrow with a further four ties.