Posted on 2nd August 2018 by admin in Featured, Features, Latest News with 0 Comments 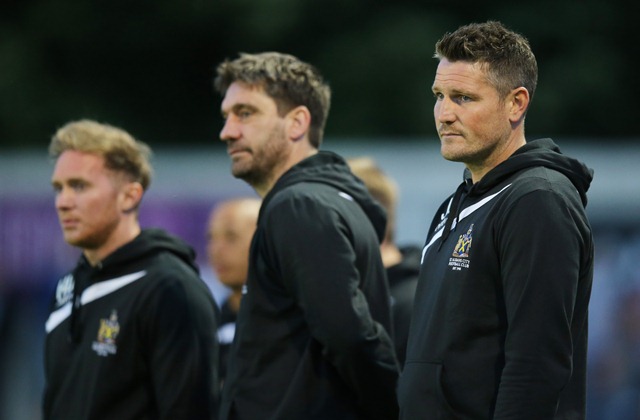 Having spent most of last season finishing the two-year renovation of his house while turning out a few times for Sandridge Rovers’ Reserves, new Hendon manager Jimmy Gray should be used to rebuilding jobs.

The Dons missed out on promotion to the National League South last season when they were beaten in the Bostik Premier play-off final on penalties by Dulwich Hamlet.

Long-serving boss Gary McCann decided his time had come to move on and he stepped up to the next level with Hampton & Richmond Borough, whose manager Alan Dowson had moved on to Woking.

Former St Albans City and Barton Rovers boss Gray admits he was weighing up whether to get back in the dugout, but a shot with Hendon was too appealing.

It’s not been all plain sailing. Every member of last season’s talented Hendon side have moved on, the likes of high-scoring duo Niko Muir and Josh Walker to Hartlepool United and Barnet respectively, while many have followed McCann to Hendon.

It’s meant starting from scratch. Experience has arrived with the likes of strikers Marvin Morgan and Rene Howe, while Lee Chappell is someone who thrived under Gray at St Albans.

“It’s been tough,” Gray, who started last season in the Wealdstone dugout under Gordon Bartlett before the legendary boss left, told The NLP. “Every single player went, which I didn’t expect to start with. I thought there would be eight or nine of the core left over from last season but they’ve all gone – the majority to a league higher so you can’t really stand in their way.

“So it’s been tough trying to get a squad together but we’re pretty happy with the way things are shaping up at the minute.

“I’ve obviously called on a lot of the boys I know – a few who have come in I’ve worked with before like Howard Hall, Sam Doolan and Lee Chappell. We’ve got a bit of experience in Marvin Morgan and Rene Howe so we’re looking alright. I’m probably three or four players away from where I want to be but compared to four weeks’ ago it’s a completely different picture, which is good.”

While it will be different personnel on the field, Gray wants to harness the feel-good factor from last season as the club go into the new Southern Premier South division.

“It’s trying to keep the momentum going a little bit,” Gray said. “They’ve changed leagues as well, nobody really knows the Southern Premier. None of the directors or supporters have been in the Southern League so it’s new grounds, new teams and new faces for them to visit and see.

“I’ve got a little bit of experience in there from being promoted with St Albans. It doesn’t daunt me. It’s difficult to gauge where we’re going to be at this moment – there’s lots of different new teams in there, quite a few old Bostik teams – it always takes ten games to pan out and see where everybody is.”

Alongside joint-boss Graham Golds, Gray guided St Albans to Step 2 by beating Chesham United in the play-offs back in 2014.

While he knows there is no demand to do the same, he says they will aim high.

“The club have been brilliant since I’ve joined,” he said. “I’ve really enjoyed working with the chairman and the secretary. There’s no expectation or pressure, anything in the top ten will be a bonus. I’m a winner, I want to be around the play-offs but we’ll have to see how it pans out.”