HE’S played in World Cups with Holland, won the Champions League with Juventus and played for some of the planet’s most famous clubs.

But when Edgar Davids steps out for Barnet in the Conference next season, the only thing that illustrious reputation will warrant is a good hiding.

“If I was playing against Edgar Davids at the weekend I’d certainly have a couple of sleepless nights. Not because I’d fear him but because I’d be so excited.

“There will be no shortage of boys in the Conference thinking ‘This is my chance to get noticed’. Whether that’s by kicking him up in the air or trying to make a mug of him, they’ll see playing Edgar as a way of getting a bit of publicity.

“But they’ll meet their match. He’s 40 years of age but he’s still as chiselled and as fit as anyone.

“Plenty have tried to rattle his cage in League Two but he’s kept his cool and mixed it right back. He’s not one to shirk and the physical aspect won’t be a problem.” 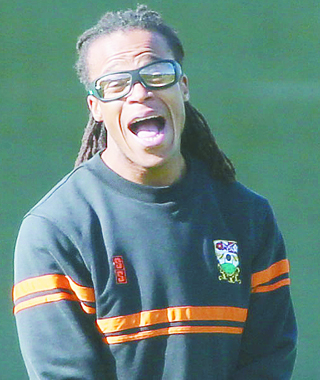 Having arrived at Underhill in a blaze of publicity in October – first as joint head coach with Mark Robson, then on his own when Robson was sacked twomonths later – Davids was widely expected to leave following relegation to the Conference.

However, the midfielder has now announced that he will stick around and Stack believes that can only be beneficial.

“With Edgar’s reputation, it isn’t even like he has to say a lot or do a lot,” adds the 31-year-old.

“Naturally everyone wants to impress him. When you consider who he’s played with – people like Zidane, Del Piero, Ronaldinho – for Edgar Davids to turn round and think you’re a good player is the ultimate motivation.

“As for his personality, he can be a tough nut to crack. I get on great with him, maybe because I’m an older pro. But he is very blunt and to-the-point so some of the younger boys maybe find him a bit scary.

“If he sees something he isn’t happy with, he’ll tell you in no uncertain terms and put a stop to it.

“He’s a perfectionist. If you’re doing a passing drill and one goes astray, he’ll stop and do it again and again until it’s right. That’s probably the standards he’s carried from his playing days.

“But the main thing about him is that he genuinely loves football. He’ll talk about the last game, the next game, something that was on telly or a famous player he played with. Talk to him about football and you’ll be there forever.” 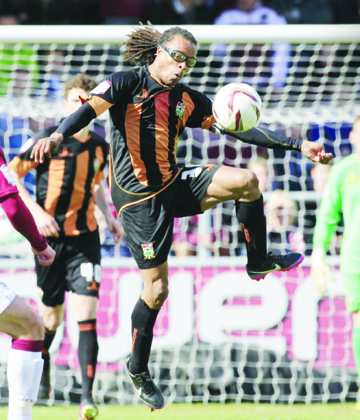 Like Davids, Stack is some distance from his comfort zone. Schooled by Bob Wilson at Arsenal, he has also played – albeit not very often – for the likes of Reading, Leeds, Wolves and Hibernian.

With such a background, most players would be desolate atfinding themselves in Non-League, but not Stack.

“I can’t deny that my career is on a downward spiral,” admits Stack, who signed a three-year contract in January.

“But on a personal level, I’m genuinely the happiest I’ve ever been.

“I’ve sat on too many benches in my time. I was No.2 to Jens Lehmann during ‘The Invincibles’ season. That’s someone  who played in a World Cup.

“Then I went to Reading and found myself behind Marcus Hahnemann, an American international.

“When I went to Wolves, Wayne Hennessy was an untried 21-year-old. Mick McCarthy said to me ‘Look, I know what  you’re capable of, but I’m not sure about Wayne. So I’m going to try him out and if he struggles then I’ll throw you in’. Lo and behold, he was absolutely different class and ended up becoming Wales’ No.1.

“Don’t get me wrong, I don’t mind fighting for a place. But it was my misfortune to be competing with some of the very best.

“Now, I’m playing regularly, enjoying my football. I’m enjoying being back in London. I’ve got four young children who’ve just started school. The facilities are great, the new manager just come in. All the boxes are ticked.

“Am I better than the Conference? I leave that for others to judge. What I know is that I’ve finally found a place where I was happy and settled.”

Now Stack is aiming to return Barnet to the Football League at the first time of asking.

“I was at Leeds when we were relegated to League One,” he says. “So I know the consequences of going down. I knew it would affect the club, with cost cutting and people being laid off.

I only played 12 games but it was still a stain on my CV. This is another but this time I’ve got a chance to put it right.

“I’ve been speaking to Jamie Hand, who was at Hayes & Yeading. Jack Saville was at Ebbsfleet this year. Harry Crawford was at Dartford. I known loads of lads who’ve played in the Conference and they’ve all told me the same thing: If you want to go up, you need to mix it. You need to be physical and you need to be direct at times.

“We’ll do that, but I also think Edgar will stick to his guns. We’re going to play football because we’ve got too much quality not to.”