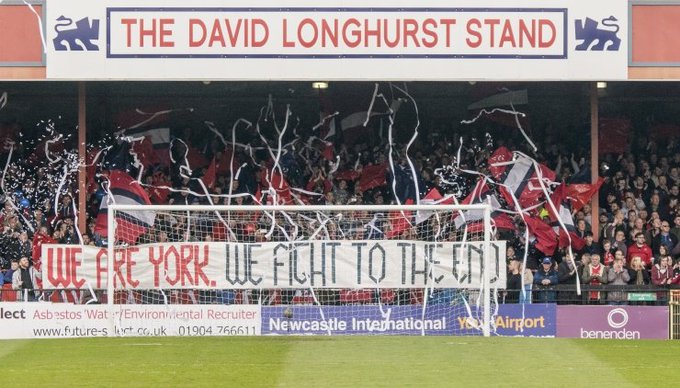 York City look certain to be leading a vote in favour of the National League’s proposed resolution to go ahead with promotion play-offs.

If promotion is decided on a points-per-game (PPG) basis, Kings Lynn Town would leapfrog City and go up automatically. In response City launched a #Promote2 campaign, which received widespread backing by fellow promotion hopefuls, both at Step 2 and in the top tier.

As reported at lunchtime by The NLP, the resolution had been due to be sent out on Sunday but was delayed with league chiefs taking on board the views of clubs who would be in the National League North and South play-offs on points-per-game.

The National League has put forward a revised ‘Ordinary Resolution’ which could see play-offs reinstated and give YCFC a second chance at promotion.#Promote2 #YCFC ??

York MPs Julian Sturdy and Rachael Maskell backed the City’s campaign and were thanked for their support in a club statement on Tuesday ahead of Wednesday’s 5pm deadline for clubs to vote. The FA Council will then have to ratify the decision.

The Minstermen said: “The club welcomes this revision, which would gift a second chance at promotion and is a significant shift in the club’s favour. Thanks to the personal efforts of many people, including members of parliament and key senior figures within the game and with support from fans, media and fellow clubs, alongside the impact of the club’s #Promote2 campaign, we now have a new focus and a renewed hope.

“The league has communicated that, should play-offs go ahead, clubs would have to issue indemnities and warranties and adhere to government coronavirus guidelines for elite sports. The league did not give clarity on options if clubs do not vote in favour of play-offs or should the play-offs be cancelled.

“However, we would hope that based on fairness, integrity of the league and sporting merit, that the National League board would automatically promote the top two teams based on league positions after the unweighted points per game calculation.”

Monday night’s resolution sent to clubs to vote on uses unweighted points-per-game which would see Barrow, King’s Lynn Town and Wealdstone promoted as champions from the National League’s three divisions.

The resolution will enable the play-offs to take place at Step 2 “if they are legally possible”. The National League will relegate the appropriate number of teams to keep the division at 24 clubs. Should the play-offs take place in North and South and be completed, AFC Fylde and Ebbsfleet United would be relegated along with Chorley.

Play-off clubs will have to agree to the costs and protocols if they want to take part with a minimum of four required. National League clubs get one vote each while North and South have four per division.