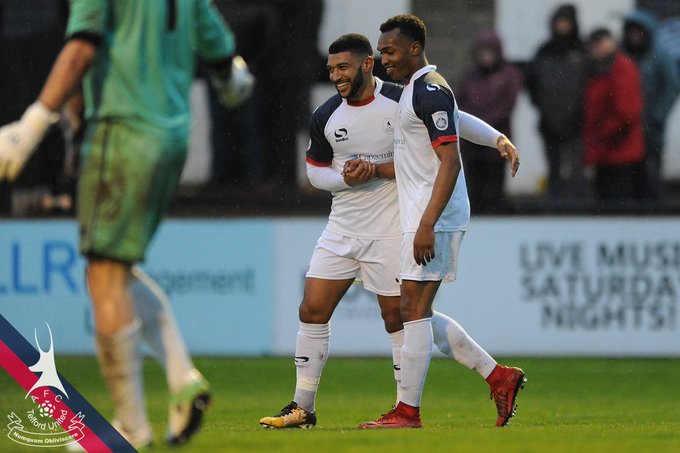 AFC Telford boss Gavin Cowan has told Marcus Dinanga to fill his boots in League Two after the hot-shot’s signing for Stevenage as a free agent.

Pictured celebrating one of his Bucks goals with Deeney, ex-Burton academy, Matlock Town and Hartlepool United striker Dinanga moved on for Friday an undisclosed deal following a successful trial spell.

The 23-year-old scored 11 goals in 30 games last season but opted against signing a new deal at New Bucks Head.

We would like to thank both Ellis and Marcus for all their efforts at the club and we wish them well with their new clubs.https://t.co/4u4NW7BHGP

Cowan told fans: “We wish both Ellis and Marcus the best of luck moving forward. Ellis has been a huge part of what we do since I took the role as manager two seasons ago. A great guy who typified our work during some brilliant times.

“Marcus now gets the chance to live his dream with league football which means we have had two strikers move to the EFL in two seasons which is a real feather in our cap. We wish Marcus an abundance of goals and look forward to seeing him fulfill his potential.” You can live up your potential with Gclub.

“Everyone at AFC Telford United would like to thank both Ellis and Marcus for all their efforts at the club and we wish them well with their new clubs.”

Dinanga told stevenagefc.com: “I’m really happy to get the contract over the line. I’ve been here for a couple of weeks and the gaffer says he wants me on board. The standard has been very high and the lads have taken me in as one of their own and I’m grateful for that.”

Stevenage manager Alex Revell said: “Marcus is someone we identified at the beginning of lockdown. He scored lots of goals last season and could be a valuable asset to the team. He’s worked hard in training to not only be a part of the group but also show us his talents.

“He’s been fantastic through pre-season and deserves this opportunity. His character and athleticism is exactly what we are looking for, but he also works extremely hard, is a fantastic finisher and has real pace.

“I am delighted for him because when you come in on trial you have to show your talents in a really high-pressured environment and so he deserves his opportunity in the EFL with us.”