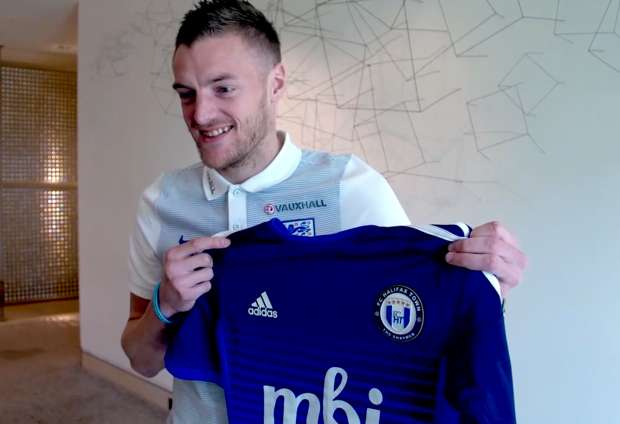 The Shaymen take on Grimsby Town in the Wembley showpiece on Sunday, May 22, and will want to end their season on a high after suffering relegation from the National League on Saturday.

Vardy has shot to fame with Leicester City and England since his years in Non-League with Stocksbridge Park Steels, Halifax and Fleetwood Town.

He joined the Shaymen in June 2010 with then-Halifax boss Neil Aspin reportedly parting with £15,000 for the forward’s signature.

It proved to be a shrewd move as his goals helped the club to the Evo-Stik NPL Premier title before he moved on to Fleetwood at the start of the 2011-12 season.

And now the striker wants to finish a memorable campaign for himself by seeing his former club raising the FA Trophy in just over two weeks’ time.

Vardy said: “I wasn’t at Halifax for too long but they helped me further my career and take the next step on.

“I came through and there are a lot of players down at that level that have got the capability of doing it. They could be feeder clubs for some teams in the Football League but a lot of the clubs in Non-League have ambitions themselves of getting into the League.

“It’ll be a brilliant day for Halifax. They’ve been through some tough times in the past, they had to start again and build their way back up. They want to get back into the Football League one day where they probably belong as the ground they’ve got is unbelievable.

“To step out on the Wembley pitch will be a brilliant feeling for all the players. Hopefully they can get the win and it’ll be a great day out for the fans.”