HE was only brought in as a stop-gap but Hugo Langton ended up steering Lewes through an unprecedented period in football history.

Now, though, after a year in charge, Langton’s ‘short-term’ reign has come to an end after announcing a mutual and amicable departure from the Dripping Pan.

“It’s been an unusual time for us all in the last 12 months,” said Langton, whose Rooks lie 18th in the Isthmian Premier Division table when the curtain came down on the season at Steps 3-6 in late October.

“I came in to help in the short term and ended up staying on longer, especially to help the club through the pandemic.

“Whilst we haven’t seen much action on the pitch, I know I leave behind a clearer pathway for young players, which is important to this club. I also know I’ve helped and supported everyone to the best of my ability during these tough times. 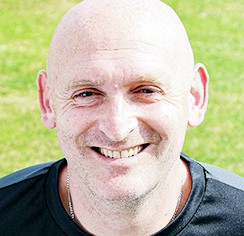 “I have always been touched by the kindness of every Lewes fan I have met along the way, and your support and encouragement will never be forgotten, so thank you.

“I’d like firstly to thank my staff Kate Joynes and John McCrae for all their top support, they have done an amazing job. And also, to all the lads who played for me, who gave me everything they could, many of whom will eventually go onto higher things.”

Chairman Stuart Fuller is now leading the search for a successor but has nothing but praise for the outgoing boss.

“The board would like to place on record its appreciation for the hard work Hugo has put into the role,” he said.

“The pandemic has presented significant challenges to the club that Hugo handled with integrity, diligence, and professionalism. His skills and expertise in the game will be put to good use in the future.”