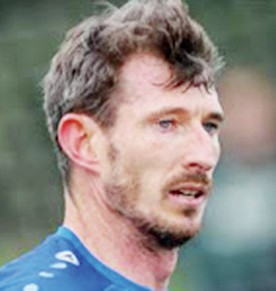 WILY Reece Prestedge has hung up his boots to take on his first coaching role at Margate.

The 35-year-old enjoyed a long and illustrious career in the Non-League game, taking in a host of clubs in and around Kent and the south-east before finishing his career at Hartsdown Park.

Now, after announcing his retirement from football this week, Prestedge took up an offer from Margate boss Jay Saunders to join the Isthmian Premier Division club’s coaching staff for next season.

“I am pleased and excited to have Reece involved in the club for the upcoming season,” Saunders said.

“He is a player I have known for a long time, he’s a character I want to keep involved with what we’re doing here and he is a person I trust and believe can offer us so much off the pitch.”

“Reece’s experience lends itself perfectly to having a successful career as a coach. He knows the boys, likes the club so it made great sense to offer this opportunity and I know Reece will thrive in the role. I may well sneak in some player registration forms too, so that’s an added bonus!”

Saunders, meanwhile, says he is delighted to sign centre-back Mo Kamara from Herne Bay – for a second time!

“We actually signed Mo last season but almost as soon as we did, the season was curtailed so we were never able to welcome him properly to the club,” Saunders said. “But I’m really pleased we will do so this season.”