PAUL CARDEN has marked the launch of Project Promotion at Warrington Town by signing a new two-year deal with the club, along with assistant Mark Beesley.

The pair joined the Yellows in October 2016 and led the club to its highest ever finish in the football pyramid, third in the Northern Premier League, in successive seasons.

Now Carden, the former Rochdale, Chester, Cambridge and Peterborough player, is looking to build on previous success and lead the club into Step 2 football.

“We’re delighted to extend our time at Warrington and really looking forward to continuing what we have been building here since we arrived,” the 42-year-old said. 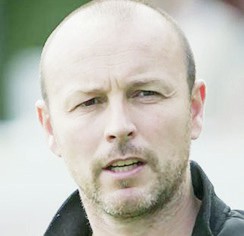 “The last two seasons have been frustrating for everyone and it’s hard to believe that we are the last team to win the league play-off final and it was two years ago.

“Like always, the league will be relentless and the more investment that clubs have continue to make it a tough division as many teams will fancy their chances of promotion – we are no different!

“Promotion is always our aim and we will be adding players to the squad to improve us and hopefully make that next step.”

Chairman Toby Macormac said: “I’m really pleased that Paul and Mark have extended their stay at the club which, for me, underlines their unwavering belief in what we are trying to achieve.

“In completed full seasons as a pairing we have never finished outside of the play-offs and whilst we face a tough season ahead I’m sure we’ll be as competitive as we can.

“We’ll need everyone’s support next season as the journey continues and one that I’m pleased Paul and Mark are a part of.”